In 2014, Ghost month started July 27, 2014 and will end August 24, 2014. At this time, it is said that starting things or launching a business is a big no-no. It is also said that moving houses or getting married at this time is not advised.

I recently spoke to some Filipino friends who thought that Ghost month simply meant that ghosts are more powerful at this time of the year, hence, it is the best time to go ghost hunting. Eh?!?!? 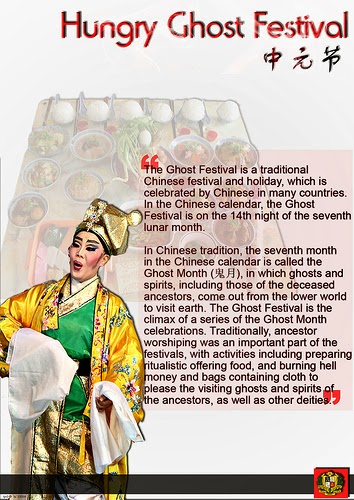 Yes, spirits are "stronger" in making their presence known but instead of hunting them down, you should actually avoid talking about them because they may think you are inviting them. I don't think anyone in their right mind would want to invite ghosts into their homes. Also, it is called respect to just let them be. And it harm none, do what thou will as the saying goes.

There are many things that elders have said to avoid doing during ghost month. Should you follow everything? I think not. However, there really isn't much to lose if we do so. I say, better safe than sorry. After all, one can never be too careful when it comes to dealing with the supernatural.

on August 08, 2014
Email ThisBlogThis!Share to TwitterShare to FacebookShare to Pinterest
Labels: Sharing Knowledge