FM and I met up yesterday. Supposed to be, it would be another week before we'd meet (or so I thought) but he told me that he was planning on surprising me and showing up at my place yesterday. This did not happen though because I kinda bugged him and we made plans. Teehee.

We met up yesterday and after hanging out and playing catch up, ended up at Zarks along Taft Avenue. This was one place that we have been wanting to try since I first heard of it. Along the way, my best boy friend sent an SMS and we agreed to meet up with him.

When we got to Zarks, we were surprised to know that there was actually a waiting list. It was Sunday afternoon. We were 3rd in line so we waited. Besides, Allan wasn't there yet.

When we were finally seated, we ordered THE TOMBSTONE and the BACON WRAPPED BURGER. Just writing the name is enough to give me a heart attack. Allan and I split the tombstone while FM had the bacon wrapped burger all to himself. 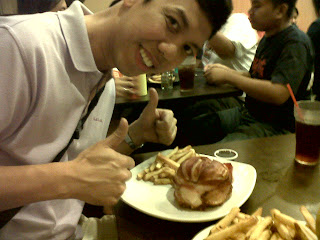 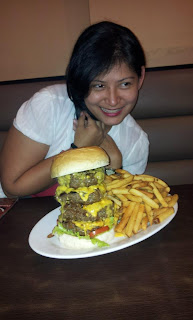 FM and I were pretty excited to have a bite of it and when I took my first bite, it was .... DISAPPOINTING. =( Sigh. It was just another beefed up [atty with a lot of extenders. When FM took a bite of his burger, he couldn't. He had to eat almost all the bacon off first before he could actually bite the burger. Due to the fact it was deep fried, the buns were soggy and had waaayyyyy too much oil on it that it was just insane if you'd actually eat the buns.

It was ordinary burger. It was a novelty. It was disappointing. In the end, I finished a patty, Allan finished 2.5 patties, and FM finished his burger and 1/4 of a patty of the tombstone. 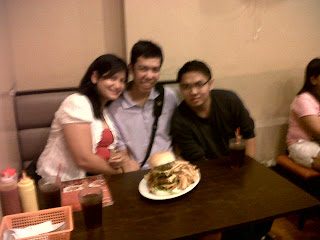 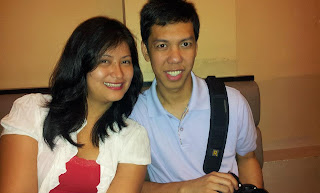 We were happy to have tried it but we're definitely not coming back anytime soon. As with all novelties, once you've given it a go, that's it. Game over.
on October 08, 2012
Email ThisBlogThis!Share to TwitterShare to FacebookShare to Pinterest
Labels: Food and Drinks