Stella: A Star on its Own

Today, I was invited to try Stella Wood Fire Bistro in Bonifacio High Street. FM and I have seen this when we dined at Nanbantei and Aria. I told him I wanted to try it. Luckily, I was able to do exactly that today. 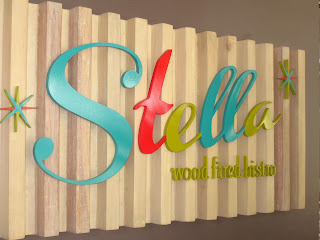 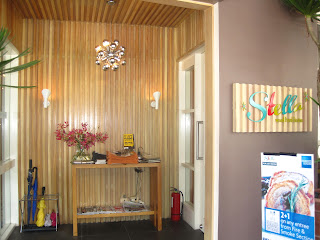 I loved the play on colors of the place. It was classy and colorful. It was welcoming, warm, yet still gives off a sense of being a tad bit upper scale. I feel that this mattered to ensure that their clientele would be maintained at a certain class.

To give you a brief background, Stella was named because they wanted the place to be a STAR on its own. Stella means star for those who may not know. They serve an international mixed cuisine but mostly veering towards West Coast with hints of European.  Chef Donny and Chef Francis, both DLSU-CSB alumni's make use of local ingredients and ensures that they are able to showcase the actual ingredients by not putting in too many stuff. To quote their Director of Operations, "We like to keep it simple."

Once the group was complete, drinks were served. 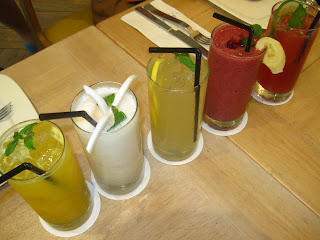 In order, we had the peach lemonade, buko and lychee shake, passionfruit lemonade, berry and banana shake, and the raspberry tea. Shakes are at Php150 each while the lemonade sparklers are at Php110 each. 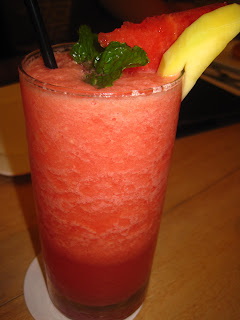 I ordered the Green Mango and Watermelon shake which was surprisingly good and sweet. It wasn't filling but it was refreshing and it was something new!

Now off to the starters. Since Stella opened end of May 2012, these have been some of their best sellers. I saw shrimp and I was like, bring it on baby!

Rocket Room's Spicy Gambas Chino (Php350)  was out of this world. The shrimp was fresh and the chili taste was just enough. The chili kicks in at the end and does not overpower. It just tantalizes the palette to make you want to eat more. 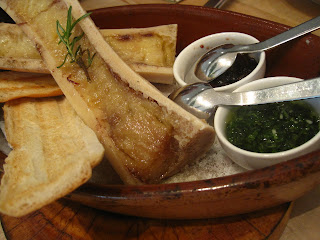 Stella's Bone Marrow (Php395) was to die for, literally. We were actually scared to try it but since there was one brave soul, the others soon followed. I was 2nd to the bravest. Made of rosemary sultana compote, gremolata, herb garlic foccaccia crisps, the Bone Marrow was surprisingly not oily nor icky in any way. It was actually pretty good and if you hadn't seen the kick ass bone marrow, you can delude yourself into thinking it wasn't anything that would just cause you to keel over and die. 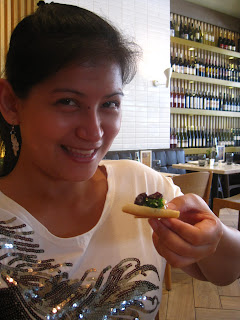 Now off to the main course. Yes, the one above were just appetizers. 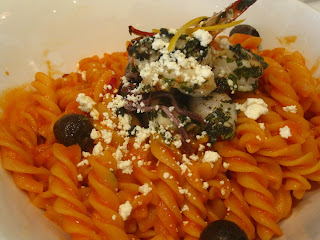 The Roasted Seafood "Firecracker" Fusili (Php395) was another revelation. It was made of spicy olive and smokey sundried tomato cream, dried chiles, fire roasted seafood, fresh herbs, and malagos ricotta. It was cheesy, spicy, sweet, and a whole lot of things. It was pretty okay but I would put it on my top 10 pasta dishes. 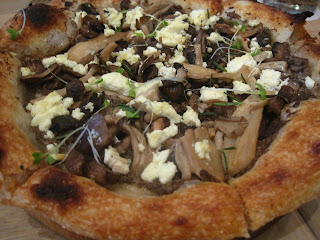 The Fire Roasted Truffled Mushroom (Php350) which was made of porcini dust, fresh harbs, and malagos ricotta was simply to die for. This was OH SO GOOD! Seriously! It was mushroom and truffles, fire roasted. It was yummy! 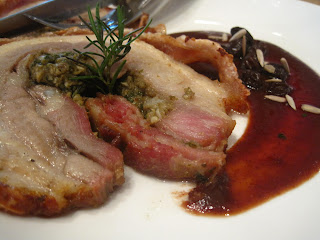 Stella's Porchetta (Php395) which was pork belly roll stuffed with double smoked bacon, fennel, and herbs; served with warm rosemary sulatana sauce was another house winner. It was sweet and creamy yet I can assure that any meat lover would salivate over this. It was masculine and feminine all at the same time. It is for everyone. 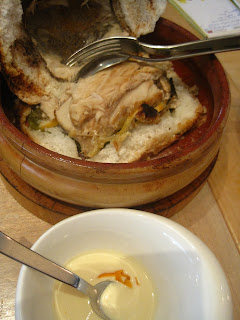 The Salt Baked Gindara Fillet (Php395) was a light dill-citrus cream with citrus bits. One thing to remember when eating this is to not scrape until the bottom part because it is filled with LOTS OF SALT. If you manage to not scrape the salt part, this is actually a wonderful dish. I say this and I am not even a fan of fish.

Dessert finally came and this was Stella's Woodfire Chocolate Almond Cookie Dough priced at Php195. This is made of salted caramel, rosemary pistachio, and topped with mantecado ice cream. Verdict: Worth trying! 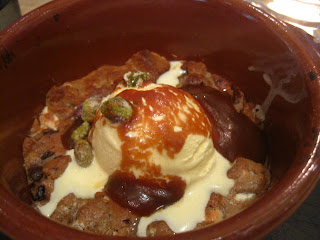 I have wanted to try Stella when I first saw it and I'm glad it delivered. Almost every dish was truly every gluttons dream and I left the place with a smile on my face. A testament that my tummy and I were both very happy.

on October 15, 2012
Email ThisBlogThis!Share to TwitterShare to FacebookShare to Pinterest
Labels: Food and Drinks