Do you want to know more about Imelda Marcos? Do you ever wonder what goes on inside her beautiful coiffed head? Have you at one time or another said, "I would love to have a cup of coffee with her and ask her, were you able to wear all 1500 shoes that you had?"

I wasn't able to do that but for one night, I was intimate with Imelda Marcos. Yes, you read that right. Former First Lady, Iron Butterfly, and lover of shoes ... Imelda Romualdes Marcos and I were intimate.  This was made possible by Carlos Celdran. 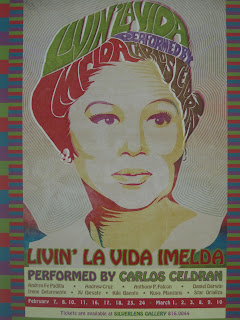 If you want to experience the same kind of intimacy that I did, let Carlos Celdran tour you into the beautiful world of Imelda, aptly called, Livin' La Vida Imelda; for to live her life, you need to be just a tad bit loca to survive.

I was more than excited when Carlos himself told me that there was a bloggers barter happening on the 7th of February for the preview night of his show. I immediately juggled my entire schedule to ensure that at 8pm, February 7, I would be at Silverlens Lab Gallery in Pasong Tamo Extension, seated and waiting for the show.

I was too excited. I arrived 6pm. Lucky for me, there was another crazier soul than I was and we chatted the hours away. 30 minutes before the show started, I was able to catch Carlos and hand over to him my barter for the show. He said he loved it. I hope he wears it. 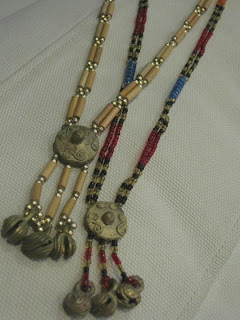 I was more than happy when he actually recognized me and thanked me for being able to make time for it. He didn't know that this was a dream come true and a check on my bucket list. After some chatter, he told me that I could already go inside and pick a spot to sit on. I was more than happy to oblige. I was also very thankful that Carlos Celdran wasn't uppity or a snob. This made him my #2 celebrity crush. Mo Twister will always be first.

The set was very simple. It was a studio but what blew me away was the electric tape used to depict CCP, PICC, Manila Film Center, and the like. GENIUS! Sheer genius and much creativity. Bravo I say.

I kept wondering how he would tour us to the different structures Imelda had done and this answered my question. It proved that when there is a will, there is a way. Thank God for creative geniuses.


I honestly did not move the entire first part of the show. The strain on my back and neck during intermission proved it. I was hanging on to his every word. He is a engaging when he talks. He draws you in, allows you to have a glimpse of the world he is talking about and the fascination is truly contagious. If I could have 1/2 of his skill, I would die a happy woman.

The show was a success. It was a standing room but no one was complaining because it was oh so worth it. It lasted almost 2 hours but I did not even feel it was that long because I was just waiting for more ... and more ... and more. When he finished, I felt like saying "why?!?!?!"

This was truly another night to remember and words are not enough to describe how I felt about it. Awesome, wonderful, and fantastic are not enough. It was truly IMELDIFIC!

There will be 15 show dates, these are scheduled on Thursday to Saturday nights