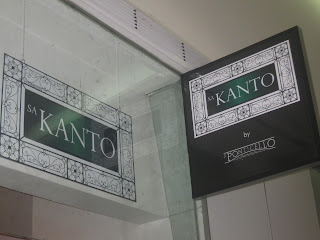 It was my first Eats a Date event held by OpenRice. I've read about these kind of events before but only had the chance to attend one today. It was a good thing that the featured resto was a place I've never eaten at. If you're a regular reader of this blog, you'd know that my weakness is trying out new places.

I wanted to be sure that I wouldn't be late hence I ended up being at the venue 15 minutes before it started. I was so early that I got there even before the organizers. It was a blessing since I was able to take photos of the place before people started pouring in.

Once you enter Sa Kanto, the initial feeling you get is that you're at the entrance of a 3 star hotel. The huge vase and gigantic mirror on the wall, coupled with fancy magazines give off that atmosphere. The chairs and tables however manage to give off a cozy vibe which offsets the high end feel of the entrance. 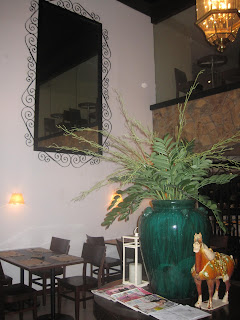 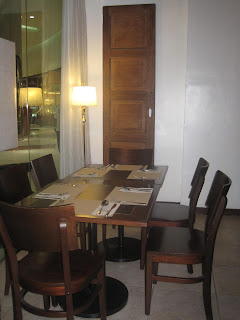 I found this deer on the wall decor a little bit off though. I think they were going for country feel but it just seemed a little awkward. However, it does make Sa Kanto distinct so it helps in recall for them. If you google the place, images similar to the one below pops out. 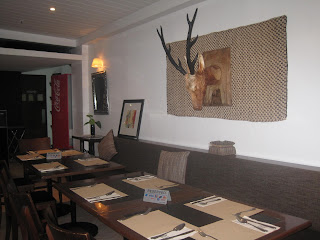 Once everyone settled in, they served us our starter and salad. The Gambas Chorizo did not make much of an impression on me but the Ensaladang Ampalaya was really good. It wasn't bitter and it was done just right. I could have eaten the entire plate if there weren't any other food that was being served.

The chicken isaw is actually not part yet of their menu. It's on their planning stage and we were the lucky guinea pigs. It was actually pretty good save for the fact that the calamansi overpowered everything else. If they could lessen the taste of the calamansi, this would be perfect.

This one is called Dynamite and what a blast it was. I normally won't be caught dead eating what is obviously a large chili but I gave this one a shot and I was blown away. It was so good that I actually finished the entire thing ... as well as the Kanto Style Iced Tea because I kept drinking it while I was munching on this. Talk about good partnership.

We had a bite and we all went "ooohhh!" Yes, it was that good. I've been trying to cut down on rice and was actually pretty happy about the small cups of rice that they served but this Pork Binagoongan almost had me ordering another plate of rice. The shrimp paste was just right and the pork was soft and succulent. If I wasn't experiencing a moment of decency, I would have asked for an entire order to take home to Momma. It was THAT good.

The tagline for this is that "its so tender, it may fall off the bone" and boy with this one, they truly delivered. I can honestly say that this is the most tender crispy tadyang I have ever tasted. I have no idea how they did it but they need to be consistent because this is something that people would keep coming back for.

To see the other viands we had, please go here.

We had desserts afterwards and the langka sauce was tasty but it was the leche flan that was the runaway winner. It was heavy and the sweetness was just right. I could have eaten 5 of it.

We were lucky to also have the owners and general manager with us. They told us throughout the 3 hour lunch we had how Sa Kanto came about and what they were aiming for. They said that they wanted to have a place where people could hang out and chill. If the target market is Class A and B, then they hit the nail right on the head.

The only thing that I think could use some improvement would be the service. The attendants were not that attentive because we had more than 5 instances where we had to repeatedly call their attention. If the aim of Sa Kanto is to be the hang out place of choice, then the people who go there need feel taken cared of and attended to. The place wasn't that full so we were expecting them to be more prompt. However, when you do manage to get their attention, they are quite friendly and helpful. You just need to snag their eye first.

Overall, I would say that this dining experience was truly a pleasure. Food was great, ambiance was cozy and the owners made us feel welcome.  Best part? I was with blogger friends. 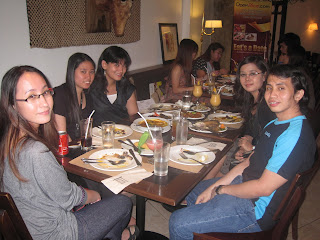 Thank you Open Rice and thank you, Sa Kanto by Ponticello, for a wonderful lunch.