A Fire in the Soul: A Cantata 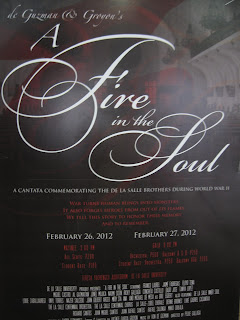 I was fortunate enough to have been invited to watch this play and blog about it. As with any new play, I did not check the summary or synopsis because I did not want to be spoiled. I have learned that the element of surprise when watching plays create a bigger impact on me as part of the audience and boy did A Fire in the Soul burned more brightly than any other play I've seen.

This play tells the story of the 41 innocent souls that were claimed during WW2. They were brothers and civilians who was taking refuge inside De La Salle University. They were killed for no reason, without warning, and without provocation.

This is a story of their martyrdom and this is the story of why they died. 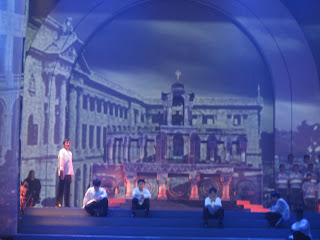 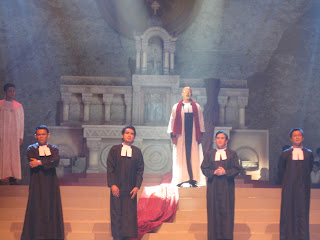 It was powerful, moving, and heart wrenching. The songs told of the stories of the martyrs, the actors conveyed the pain, and the visuals used allowed the audience to have a glimpse of events that have passed.

To know more about this, here is their facebook page.

A lot of people watched and it was a sight to see as most of the crowd were dressed up because it said on the ticket that one had to come wearing formal wear. Celebrities also came to lend support to the actors that were part of the cast.

I wish they would do more staging of this play. It is something that not only La Sallians would enjoy but something that other people should watch, learn, and talk about. The martyrdom of the brothers and the civilians during the war should serve as a constant reminder to us that everything happens for a reason.

The martyrdom of the 16 brothers should never be forgotten. They should remain alive ... a fire continuously burning ... a fire, in the soul of each and every one of us.
Everything Arts