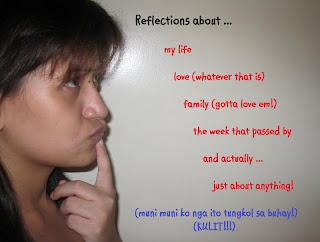 It's been 4 months since my last munimuni. No wonder some things in my life went askew. I haven't been reflecting and when I don't, I sometimes lose track of things and I don't get to ponder on things that I should.

To start, last December, I made a bucket list fore the first half of 2012. Here's my list.

Amongst the 6. Here's what I was able to accomplish.

3 out of 3 isn't so bad but it would have been better if I was able to scratch out all.

Speaking of being in a real relationship ... I have been with FM for over half a year now. I've learned a lot of things from him; some of which I refused and refused to learn until it may have been too late.

1. He's all about positivity and not pondering on problems. I am a bit negative and a big worrier.
2. He always looks at the bright side of things. I don't.
3. He's forgiving. I can hold a grudge till the end of the world.

Recent events have taught me that looking positively at things can actually yield better results. I just hope that it's not too late. I've also recently learned that forgiving does you more good than holding on to grudges. Unfortunately, I may have rubbed off the holding a grudge bit to FM. =( Hopefully, I'm wrong.

Now, updates on B.

My little son isn't so little anymore. He's 7 and he is starting to have a mind of his own. He is funny and quirky, just like his Mommy. He is also forgiving, unlike his Mommy which is a great thing.

I love that I get to spend more time with him and that I am finally learning to be more patient. I can be more chill now and less angry or quick to get upset. I have learned to deal with B in a more patient and calm manner. Who do I have to thank for? FM.

I've also discovered a really cheap craft place that is selling stuff at an all time low price. I'm still not ready to share it though. I know. I suck. I'm going to be greedy with this info for now.

Okay okay ... here is the link to get to that place.

And as for me ... I did something drastic but I won't share it yet. It's been on my bucket list for the last 17 years but I was only able to do it last night. So far, I don't regret it.