on July 25, 2012
A coworker of mine made me listen to the song Butterfly Kisses by Bob Carlisle and I ended up almost in tears. I read the lyrics and it was something that I could not relate to for my father was someone that they would call an absentee Dad.

He wasn't there for my performances, contests, awardings, or prom. He was rarely there for birthdays and holidays. He wasn't an OFW but he was very dedicated to his work and would live in the factory to run the business.

As a child, I hated him for it. As an adult, I tried hard to understand him but still failed. As a Mother who had to struggle to get my child to school, I finally understood him.

With this, I realized that though he may not have been the father I wished him to be, he was the best father that he knew how to be and for that, I have finally learned to love and accept him, flaws and all.

You still owe me a dance on my wedding though. =p 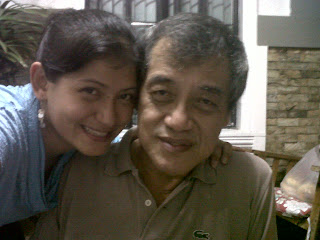