One day, you asked to see me and I made the mistake of saying yes. I was apprehensive. You see, I kind of liked you based on the conversations we had. When I saw you, I said to myself, "oh no! He's kinda cute!" You smiled and we had dinner. Afterwards, we watched a movie and then we had coffee. We talked and talked and talked until 430am. It was crazy.

We kept laughing and sharing stories. Still, there was a hint during that conversation. I should have taken that hint and smacked myself in the head with it over and over again. After all, you said that you were yourself with me and when you like a girl, you are not yourself. There! It was the sign.

You were not into me.

However, you continued talking to me. You messaged me when you wake up, on your way to work, on your way home, and when you get home. Sometimes, you even messaged me when you were at work and the silly goof that I am, that made me smile. After all, I had an idea of how busy you were and so making time for me made me feel special. I should have checked myself at the special unit of a psych ward instead.

I then asked if you wanted to watch me at an event and eventhough it was pretty early, you said yes. It made me smile. Again, I thought I was special. You got there and you took some videos of me I think. I pretended not to notice but I knew you were taking photos or videos. After the event, you stayed with me and spent the day with me.

My heart was all giggles and my tummy was full of butterflies. Again, I thought I was special.

We had ice cream and then we spent time to my favorite place which was the bookstore. We hanged out there and talked again. It felt so good when you didn't even realized it rained because you were just so focused on our talk. I thought you were focused on me. Now I think you're just like that when you enjoy the talk. You shut down everything else.

We had dinner when we weren't supposed to. We were walking towards the bus stop and then we just ended up having dinner and the talk just continued. It's always like that with us. As you sad, time flies when you're with me. The talk never stopped and we just keep yakking. I learned things from you and you learned things from me as well. Finally, at 1030pm I had to say good night. I was worried we'd end up talking till morning again and I couldn't stay out that late even though I really wanted to.

I wanted to kiss you that night but of course I didn't. When you kissed me goodbye on the cheek and you pulled my body close to yours, I wanted to let out a small scream of happiness. Thankfully, I restrained myself. I'm sure you didn't even notice. I did. I think every single atom in my body noticed how near your body was to mine.

I thought I was special. Seriously, what is wrong with me?

It's been two weeks since then. Yes, we still talk everyday. You still message me though lately, it hasn't been the same. Maybe I'm over thinking, maybe I'm paranoid, maybe there's just no meaning to it, or perhaps, you are just busy.

However, you seenzone me now more often than before. You take longer to reply. Most of all, you haven't invited me out again.

The last time we saw each other you said you didn't know whether you are interested in me that way or you just want to keep me as a friend. You did admit that you could fall in love with me but you also admitted that I only get you mentally.

Maybe its me. Maybe its really the reality. Still, it hurts knowing that things are not the same anymore. Its my fault actually. You were sweet and I let myself believe that it meant I was special. You never said I was special. It was just me ... it was just all in my head.

It's okay though. I'll get over this. I always do. I'll distance myself and tell myself that I am not special and that you do not like me that way over and over again. Eventually, my thick skull would get it and I'll be fine.

When I do, I'm putting you in the friendzone and smacking myself in the head as to why I even fell for the pa-fall guy. I just never learn. 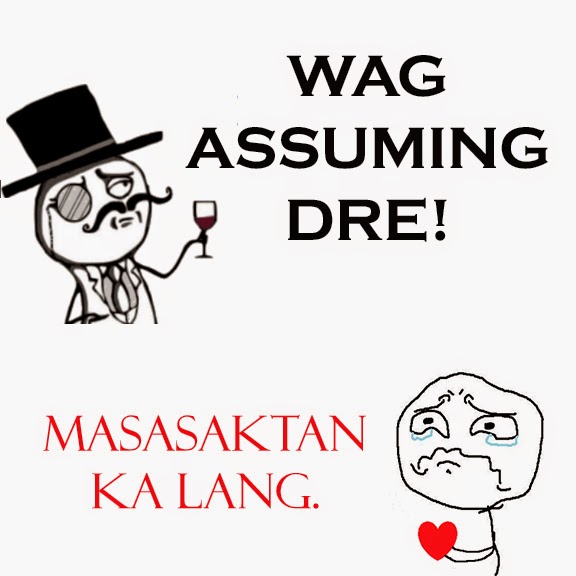 on November 03, 2014
Email ThisBlogThis!Share to TwitterShare to FacebookShare to Pinterest
Labels: Relationships