Admit it. You sometimes wonder if any of the OPPA you follow on social media actually eat or not because they have such killer bodies. You've always wondered what they would be like during their down time and if they are like you and me who can chow down like there's no tomorrow.

Well, fret no more coz we have OPPA Nickhun and OPPA Xander taking part in tvN's One Night Food Trip International Edition. Joining them are cousins Danica and Ciara Sotto who will be competing against our Korean stars.

Asia’s craziest food contest returns to the Philippines as One Night Food Trip – International Edition enters its second season on tvN Asia. This time, K-pop heartthrobs Nichkhun of boy band 2PM and actor-host Alexander “Xander” Lee face off against celebrity cousins Danica Sotto-Pingris and Ciara Sotto in a culinary frenzy around the country. One Night Food Trip – International Edition will fly exclusively with
Cebu Pacific for the entire second season. 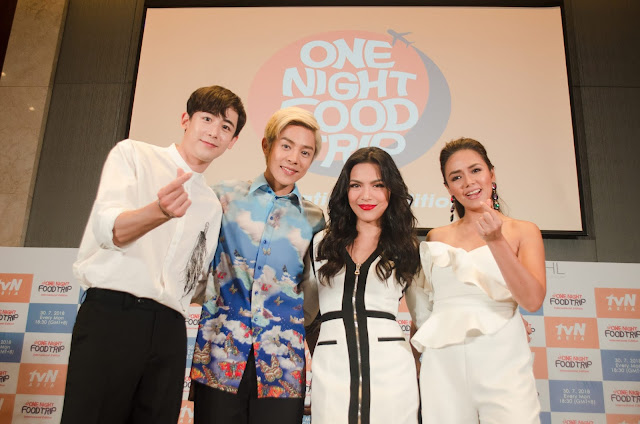 Based on popular Korean food competition show One Night Food Trip, the international edition adds a twist by having K-pop celebrities travel to various Asian destination including the Philippines, Taiwan, South Korea, and Malaysia where they eat, play, and compete against local celebrities. Each team must complete missions involving exotic flavors and cultural attractions to earn stamps. The team that collects the most
stamps within 48 hours takes home the Golden Passport.

In the Philippine segment of the show, Nichkhun and Xander jet-set together from Cebu to Pampanga, while celebrity chef Danica and singer-actress Ciara take a separate route from Coron to Legazpi for a unique experience of the country’s sights and delicacies. One of their stops is at luxury integrated resort City of Dreams Manila where they explore the Forbes five-star hotel, NÜWA, try out decadent dishes at the award-winning Crystal Dragon restaurant, and immerse in the DreamWorks-inspired interactive play space called DreamPlay.

The four-episode Philippine segment on Season 2 airs on 30 July (Monday) at 18:30 (GMT+8). It is in partnership with the Tourism Promotions Board, an attached agency of the Department of Tourism, that markets and promotes the Philippines domestically and internationally as a world-class tourism destination.
on July 03, 2018
Email ThisBlogThis!Share to TwitterShare to FacebookShare to Pinterest
Labels: Lifestyle and Events