FM and I had several bad arguments the past week. When I say bad, it was really bad. It was hurtful and painful. What made it worse is that it was actually all a case of misunderstanding.

After the storm passed, we talked. We realized that if only one of us would pause and let the other talk and ensure that interruptions are cut to a minimum, we could actually sort everything out. We don't need to inflict pain on each other or be hurting. We could resolve almost anything, no matter how bad we perceived it to be, if only we would talk.

It took us 2 severe fights and an almost 2 hour conversation but we finally understood what the other wants. He now knows that if I say this, I really meant this. I now know that if he's acting like this, it actually means that.

You see, my quirk is hearing certain words being said. However, when FM gets frazzled. all is lost. I need to learn to control my outburst so that FM won't get frazzled and FM needs to take what I say as is. This way, we'd be fine.

I'm thankful that we talked and sorted everything. I'm thankful that finally, we were able to identify issues and put a resolution to them. It allowed us to know what to do the next time that we would have another misunderstanding.

Sidenote: Here's a photo collage of what happened over the weekend. We attended the lanching of Asahi Beer where I got a tiny bit wasted and FM had to play the knight in shining armor. With this recent event, I thereby conclude that I am officially a lightweight.

We also had lunch at Tokyo Tokyo where I proceeded to eat a Sumo Meal meant for two all by myself and demolished 3 cups of rice along with it. It seems that the beer from the night before had that effect on me. GAH! 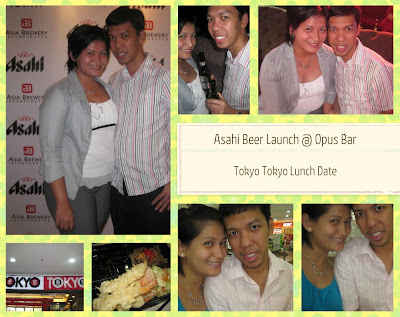 on January 27, 2013
Email ThisBlogThis!Share to TwitterShare to FacebookShare to Pinterest
Labels: Relationships