I initially saw them on their very first run at CCP. It was a free showing and all you had to do was donate as much as you want to "support" the Sipat Lawin Ensemble. When I first watched them, I had no expectations and yet they blew my mind away.

This time around, after having done several shows and doing another run at an abandoned school in Cubao, I definitely had higher expectations and FM shelled moolah to watch them. I was thinking, "this better be worth our while." I thought this because I have heard that there were changes made in the cast, the script, and the execution. I feared that they may have balked and gave in to pressure to make things more this or more that. I feared that they may have sold out.

When FM and I got to Museong Pamabata last Saturday, it was raining. It was raining hard. We actually had to buy raincoats to wear because it was the only way we could survive watching. Umbrellas just wouldn't cut it. 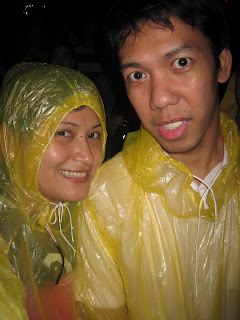 BRv3 is now underground so they do not allow photos or videos taken. They want to keep things hush and hush and hush hush it should be. BRv3 is the kind of secret that you wanna keep to yourself but at the same time, you wanna scream on top of a mountain about how GRAND the experience was.

Yes, it was GRAND.

It was crazy, it was psychotic, it was UNIQUE. We ran, we jumped over puddles, landed on them, got our foot wet, shoved a bit, got pushed, almost had blood spattered on us, cheered on a few deaths here and there, prayed someone would not die, cursed someone for being stupid enough to die, and just plain had a great time.

It was BATTALIA ROYALE at its finest. The scenes were more intense, the actors more focused and driven, the execution almost flawless. Almost because there was one key area that I felt was truly lacking. For all the death scenes were grandiose and absolutely a mind fuck, the slapping that the female actresses were doing (Bieber fans) were lousy at best.

I mean, "Come on!" You're already willing to wallow in mud, run in cemented grounds barefoot, and get chilled to the bones with the intensive rain and yet you cannot deliver a slap that's not lousy? It was the only thing that frustrated me and made me wish I could shake the actresses delivering the slaps.

Aside from this little and very minor critique, I would have to say that BRv3 left my heart pounding, had FM running at full speed almost while wearing dress shoes, and had us standing under the pouring rain for more than 2 hours not praying for the rain to stop but praying hard that the show will not be cancelle.

It was THAT intense.

To the cast, crew, and writers of BRv3, BRAVO! You did what few could do. You got better, braver, and certifiably more intense than the first shows that you presented. I hope that you continue to inspire and prove that theater is not dead and to anyone saying that it is, please, for the love of God, send Cacai and Basti to kill them. 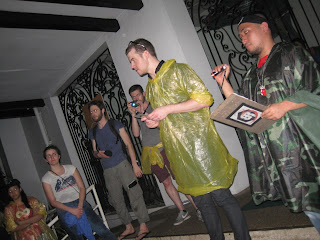 on September 17, 2012
Email ThisBlogThis!Share to TwitterShare to FacebookShare to Pinterest
Labels: Everything Arts