One of the leading problems in the world is world hunger. Ironic since a lot of countries has problems with food wastage while other countries need food badly for their citizens. You would think that it should be as easy as the countries who have too much food sending over their excess to the countries lacking food and the fix is done.

Sadly, this is not the case. For whatever reason there may be, it seems that this is not a viable solution no matter how logical and sensible it sounds. Thankfully, we have organizations like Rise Against Hunger to the rescue.

Rise Against Hunger is an international hunger relief non-profit organization that distributes food and life-changing aid to the world’s most vulnerable. In line with the celebration of their 20th year, the organization has launched “This is possible,” a global movement to end world hunger by 2030 — a vision aligned with the United Nations Sustainable Development Goal #2.

On August 31, Rise Against Hunger Philippines officially launches this campaign with “Beacons of Joy,” a gathering held at the Conrad Hotel Manila to shine the light on those who have made extraordinary efforts in rising against hunger and bringing joy and relief to communities across the country.

The event included messages from Rise Against Hunger’s various partners and stakeholders—government representatives, corporate partners, impact partners, and beneficiaries—the beacons of joy to the Filipinos in need. Outside the event, hundreds of passersby witnessed the campaign’s launch with a video display at the Mall of Asia Globe on Friday evening.

“Our mission is to end hunger in our lifetime, and the first real step is to activate a worldwide movement,” said Tom Barbitta, Chief Marketing Officer of Rise Against Hunger. “It will take the help and support from the global community to accomplish this goal, but with participation, financial contribution, volunteerism and heart, each person can change the life of another and put an end to suffering from starvation.”

Around the world, just over 815 million people lack adequate food. One in nine people go to bed hungry each night. Rise Against Hunger works to meet immediate nutritional needs today and empower the ability to build strong, resilient communities tomorrow. 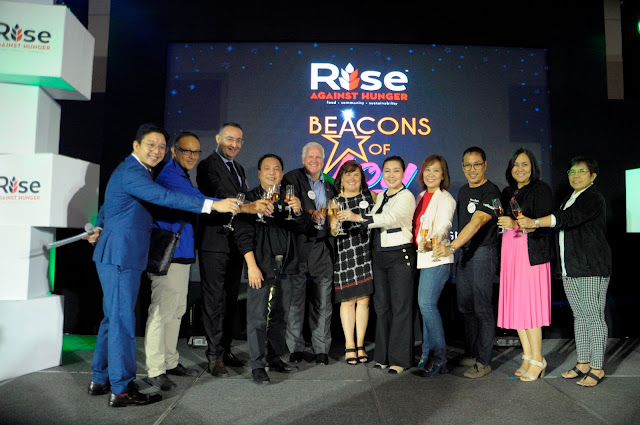 Rise Against Hunger Philippines is the latest in the organization’s twenty-five U.S. and five international locations to take part in the “This is possible.” campaign. In 2014, Rise Against Hunger opened a dedicated location in the Philippines, led by Executive Director Jomar Fleras, following the devastating aftermath of Typhoon Yolanda. Since its inception, Rise Against Hunger Philippines has packaged over 252 million meals. In 2018, the organization established the Good Food Grocer, the country’s first food bank sells nutritious food at discount prices, as well as distributes food to informal settlers and children in daycare centers.

"Rise Against Hunger, its donors, volunteers and beneficiaries join the global community in ending hunger by 2030. With the ‘Power of We,’ 2030 is possible," said Fleras.

The “This is possible.” campaign was first launched in February 2018 in New York City, where thousands of people joined together in Times Square to sign pledges to end hunger. The campaign was created to build awareness and drive a global movement to end hunger by the year 2030. So far, the initiative has also been launched in Italy, Malaysia, India and South Africa.

To learn how to get involved, visit riseagainsthungerphilippines.org.

on September 06, 2018
Email ThisBlogThis!Share to TwitterShare to FacebookShare to Pinterest
Labels: Lifestyle and Events