3 Things I Learned about Underwear and being a Mom

A few weeks ago,  I was able to get my hands on Avon's Body Illusion Underwear which promised to be seamless and would feel like second skin. I immediately gave it a try and it really does feel a lot different from the normal underwear I have tried on in the past. 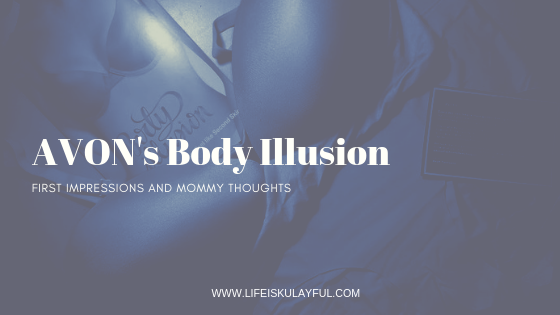 A few key differences are the lack of wire and clip on straps that cut through your skin. Ladies, you know what I'm talking about. It cuts through your skin and you are left feeling like being tied the whole day and you just feel helpless because you can't take off your bra in the middle of the day while you're out and about so you suffer.

Another one is that this bra absorbs sweat but doesn't make you feel sticky. Living in a tropical country, it can be very irritating if your bra ends up wet and sticky and you still have meetings to go to. Thankfully, this absorbs body sweat easily and seems to instantly dry it up.

The last one is that it does feel like second skin. It doesn't make an appearance if you're wearing a thin top or skirt that hugs your body. There's no visible panty line and you can freely move without worrying that everyone can see your panty through what you are wearing.

In the last two weeks, I have been having a silent debate whether to post a photo like the ones above and my main struggle is my son. You see, I have a 13 year old son and I need to consider his well being when I post something.

He has classmates that sometimes pick on him because they think I'm some sort of a minor celebrity and if I pose in underwear, they might use it against him. This is just real talk guys. I know that ideally, kids should be understanding and kind but let's face the harsh reality.

Teenagers can oftentimes be the most cruel and so I chose not to give these kids further ammunition. I think that learning to choose my battles when it comes to posting on social media and the like is the mature decision.

What I can show you is this video though of me in an event where I wore the bra and panty from AVON's Body Illusion line. As you can see, I had an awesome time and did not have a care in the world because I was able to move freely and not worry about my undies.


So what are the 3 things I learned?

1. Always pick the right clothing, starting off with your underwear. You don't need to go with the times because the classics will always work and these underwear from AVON Body Illusions will definitely be a classic.

3. When you know what matters most, making the right decision will always be easy to do. The process of getting there might be hard but the final decision will lift a burden from your heart.
on March 28, 2019
Email ThisBlogThis!Share to TwitterShare to FacebookShare to Pinterest
Labels: Lifestyle and Events