Many have read and reacted vehemently about not so funny after all ... indeed, it wasn't funny for tears were shed. However, there is more to this story. It seems the funny man was not yet ready to take his curtain call.

Here is the rest of the story.

The next day, we met up and hanged out. Days after that, we'd meet still and hang out. I know ... I am such a glutton for punsihment. In some way, I wanted to be hurt again and again so that I could get rid of the feelings that I had for him ... feelings that I thought were one way and not reciprocated.

That is, until the Cha Time incident.

We were at Cha Time and there was a couple who was sitting on the couch beside us. It was a table sharing kind of place so we didn't mind. What we did find peculiar was that they switched to the other couch on the other table though there was someone sitting in that area as well. Eventually, I noticed that the guy kept stealing glances at me and this is what pissed the girl.

I told FM about this and he said, "I don't get it. Why do they keep looking at you? You're pretty but its not really worth looking at."  OUCH!

I snapped. I told him I was leaving and that he didn't have to go with me anymore. He realized what he said and apologized. I was seething. I wasn't going to snap out of my anger. I was upset, mad, furious, frustrated, and most of all, I was hurt. I was really, really hurt.

Things were said and words were thrown. I blew up at him and he took it. He was sincerely apologetic and then he said, "You don't understand! You don't know anything that's why you don't understand." I told him of course I don't since he can't seem to tell me anything and quite frankly, I didn't want to know." He insisted and then he dropped the bomb on me. He said, "Okay! I like you. I like you as more than a friend and I didn't want to tell you because I wanted to get to know you without the romance thing hanging over our heads. I wanted to know who you are and what you really are."

I should have felt happy but I didn't. At that time, I was just so mad at him for being so stupid and indecisive; about denying what he felt and what not. Most of all, I was mad at him for hurting me when there was no need to.

I wanted to walk away. I wanted to open the car door, shout at him "well, I don't like you anymore!" and slam the door shut. I wanted to. My pride demanded it but my heart won this round. I decided to give it another chance.

I forgave him ... once again, I forgave him for hurting me. This should have been a sign that I had feelings for him, feelings that run deep ... that even I was not aware of, yet.

Friday came and I was feeling upset about work so I ended up drinking with my teammates. As luck would have it, FM picked me up. There I was, light as bubbles on a bottle of champagne and giddy as a child in a candy store.

I was talkative and I had no control over my tongue. What I thought of, I'd say. I couldn't filter. There was a point in the conversation during the night where he told me that he said I miss you on the phone earlier and I didn't reply. I told him I did not hear him say it. He then said, "tsk tsk, I knew it. I'm so gonna be neglected when we have a relationship in the future." He said it in a joking manner. I laughed and said, "Hello? Neglected? How could you be when you're so taken cared of; when you're so loved ..."

and I realized what I said and shut up. *mortifying moment for almost 3 minutes followed where he just hugged me and I hugged him back because I could not show myself to him.* You gotta remember, this is the same guy who dissed me twice already and yet I was stupid enough to say the L word. GAH! What is wrong with me?

Eventually, I had to face him and this is what he said to me. "I have loved you for several days now. I just didn't wanna tell you because I didn't want to ruin what we have. What we have is so beautiful and perfect."

I was in shock. I expected, "sorry, I don't feel the same " or worse "lets just be friends" but I did not expect a revelation like that. Then he said, "I love you."

I look forward to those days and decades. 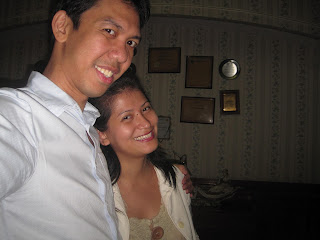 on March 19, 2012
Email ThisBlogThis!Share to TwitterShare to FacebookShare to Pinterest
Labels: Relationships