It was December 2010 when I first heard about this place. It was also December 23, 2010 when a guy first promised to take me to Gayuma. Unfortunately, he wasn't able to and Gayuma became something that I obsessed with.

When my food group decided to go there after much badgering from me, I was happy. Then things happened and I wasn't able to go with them. Gayuma now became something to covet.

Random guys, random dates, random promises of bringing me to Gayuma over the year 2011 made it more elusive. To me, it was like Gayuma was taunting me. "Hey Kathy, I'm just here. Come and get me."

I wanted Gayuma but I have lost hope of ever getting it.

Fast forward to last Friday and I was with FM hanging out at SM North. We were supposed to grab a bite to eat at some Persian place (which I wasn't such a huge fan of) when things took a turn and we ended up on our way to Gayuma.

I should have trusted my instincts and said that we can just go some other time. You see, on the way, we got lost, and lost, and took a wrong turn here and there. It was stressful. Normally, when this happens, it means that I shouldn't go to a certain place.

However, I really wanted to go to Gayuma and so after over 30 minutes of driving when it should have been 10 minutes, we saw this. 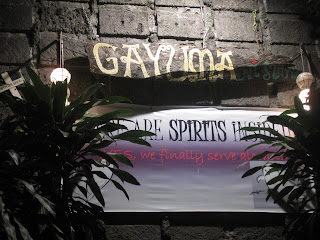 I was happy ... like giddy happy giggling like a schoolgirl inside happy. Finally, I was at Gayuma. 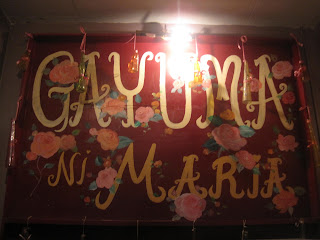 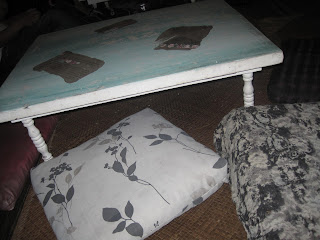 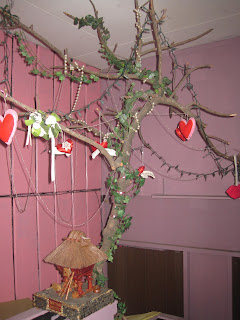 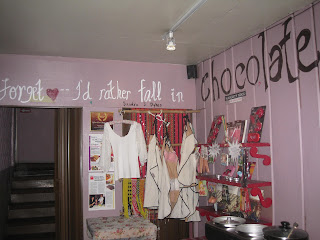 Gayuma was an assault on the visual senses. It was pink, and red, black and brown and decors all over. It was exactly what I envisioned it to be and what I wanted it to be. I was mesmerized and amazed. It was like being Alice in Wonderland.

Unfortunately, as with any adventure, it had to end somewhere and boy did it end. The place was packed and they had one server only. To be fair to him, he was really pleasant and charming. He tried ... but it was a vain effort. I have to commend him for trying though. Seriously. He remained charming and smiling the entire time that you'd have to be heartless to get mad at him. 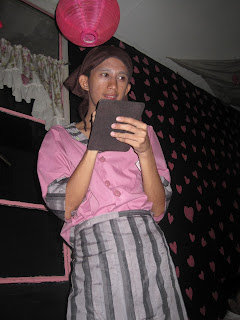 FM and I settled down and got comfy with the chairs, or tried to. It seems that when dining at Gayuma, you shouldn't wear tight jeans or a short skirt unless you fancy flashing someone. We couldn't make up our minds on what to order since we had a pretty good time looking at the names of each dish which reeked of sexual overtones. In the end, we decided to get the following:


When this was served after 30 minutes, it was cold so we had to have it reheated. The taste of the chocolate crust covering the Cream Dory fish was compromised when it was reheated which was unfortunate because it was pretty good. I liked the combination of the fish (the tanginess, naks!) and the chocolate was a perfect combination.

This one reminded me of pork being immersed in pineapple sauce. It was a bit of an overkill for someone who is not a fan of pineapple but for me, it was just right. They actually used apple and beer but the effect was that of a pineapple. Weird no?

I also ordered Beats Sex Anyday (a chocolate cake that made them famous) but it took too long that we just had to cancel it. Sadness. It was the one thing I really wanted to try.

Overall, the gayuma experience is something that I'm still willing to give another try if only to allow them to redeem themselves. I would want to go there again, maybe not on a Friday night perhaps and try the chocolate cake but since its too far, I'm pretty sure this will be another unticked box on my bucket list.

on March 11, 2012
Email ThisBlogThis!Share to TwitterShare to FacebookShare to Pinterest
Labels: Food and Drinks