It was a Monday and I initially had no plans of going out after work but when Purple Doll informed me that there was an Eats a Date event that will be held in Alabang, I immediately grabbed the chance to see her and partake of another Eats a Date.

I got lost and had to walk 3 blocks to get to my destination but I was so happy to be there. The place looked comfy and the aircon was blasting. I immediately took my seat and chatted the night away. We had to because that night, Studio Kitchen only had one chef to cook for the entire place and though it was a Monday, the place was packed more than usual for a Monday night. 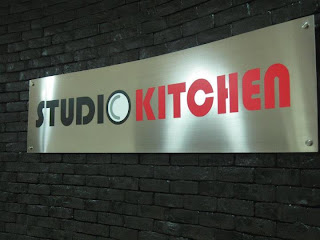 I was immediately served a Ceylon Iced Tea and it was refreshing. After, the dishes started pouring in and boy were there many. 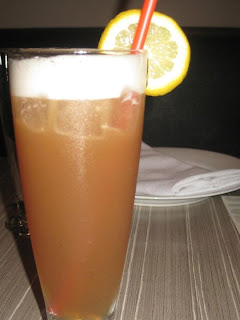 The Fresh Green Salad (Php300) came first followed by the Lapu Lapu Rossejat (Php595. and the Fresh Crab Salad (Php330.) However, it was the Funghi Pasta Ala Chitarra (Php490) that first caught my attention. 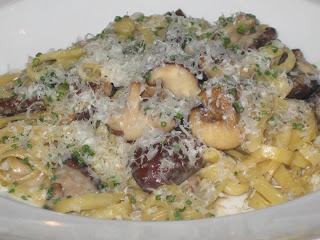 The mushroom was oh so yummy. Seriously! I wished they took out the pasta and just left the mushrooms there. It was that good. I can't remember for the life of me the taste of the pasta (not that it wasn't good, it was) but the mushrooms were just succulent.

Next that they served was the maple glazed pork belly (Php540) which deserves a description on its own. 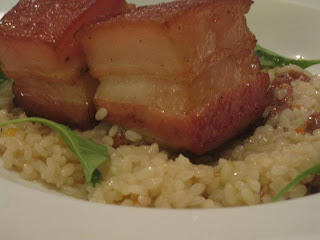 Do you see how it glistens even on photo? Do you see it shining so much you can practically put your make up on and use it as mirror? It was that scary.

The oil and the fat were just too visible, too out there, too much in your face. It was crazy. Looking at it, it was already enough for us to shudder but we had to be brave and get over the idea of having a heart attack after one bite and took our chances.

Yes, we ate it ... we ate it and we lived. I lived anyway. I haven't checked on my friends to see if they too survived.

Nah, I'm kidding. However, it really was just a bit too much fat and a bit too much oil. I think this dish could be more enjoyable if they managed to take off the fat and lessen the oil.

Finally, they served us Braised US Beef Short Rib (Php695) which was so soft the meat literally fell off the bone and Dutch Veal Cheeks (Php925.) This one had a story on its own as well. 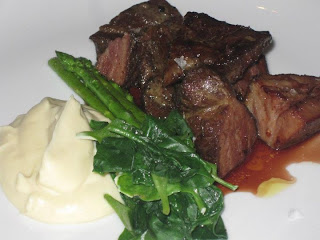 The server said to us that it was duck "cheeks" ... maybe it was just how we heard it but we were thinking the whole time, "seriously? they can cook duck cheeks this big?" It was funny.

The taste of this meal though wasn't funny. It was GREAT. It was soft and the sauce was just right and everything fit perfectly. It was one of those meals that make you go "oh yeah, totally worth it.!"

As with everything, they saved the best for last. The desserts were to die for. They should switch to serving just desserts because they have a knack for it. I could have devoured everything

This egg looks so simple but the taste was so good. It was a combination of sweet, sugary, and chocolates all over. It was heaven in an egg.

The maccarons and the chocolate biscuit were also a treat. I'd definitely pass by this place with FM one of these days and get some for my Mom. It's oh so delish. 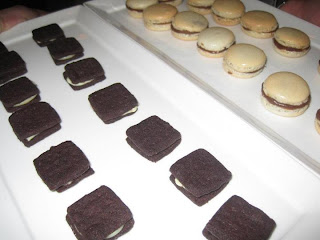 Overall, I would have to commend the chef for a really wonderful attempt to still cook up a feast eventhough it was a one man show. Hats off to you chef. 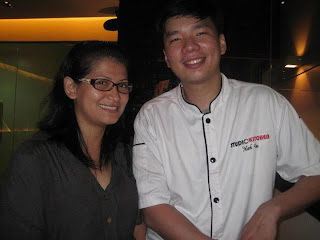 * I was invited to review the food. I did not pay for my meal. However, the free meal did not in any way sway my opinion and everything you read here is MY PERSONAL OPINION.
on March 17, 2012
Email ThisBlogThis!Share to TwitterShare to FacebookShare to Pinterest
Labels: Food and Drinks