B and the bronchitis

This week saw me as that panicked and worried Mom. You see, B had a fever from some infected wound that I thought he told my Mom about and so I was sure that it was being taken cared of. Unfortunately, this was not the case.

He hid it from my Mom and so the wound got infected. He started running a fever. 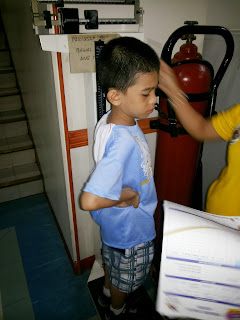 They took his weight and height and I was so disappointed with myself with the results. B's height was average for his age but his weight was lacking 11 lbs. Haayyy ....

The pedia reprimanded me a little and I felt like a little schoolgirl being reprimanded once more by my terror of a principal. Ugh. 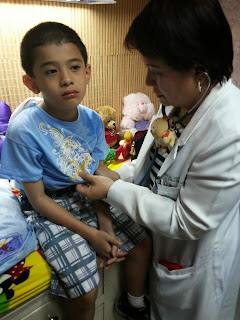 B was quite sad during the check up because he knew it was his fault why he was sick. He kept running around in school till he dripped like a faucet with sweat and of course, the sweat dries up and voila, he has bronchitis. Hayyy .... It's a good thing this pedia we got was very pleasant and actually funny.

She told me to come back next week and not worry so much. I guess it showed in my face or in the outfit I wore which screamed, "I'm a Mom and I'm a very tired Mom." 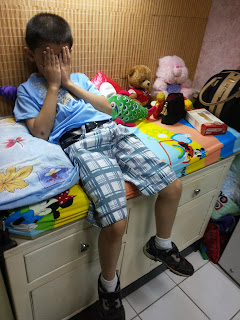 I tried to take a shot of B after the check up but he hid his face. Apparently, he feels shame. Sigh. My son, 8 years old, feels shame. It's a good thing right?

Overall, this was a struggle for me. I felt helpless and I guess, I over thought and worry too much. Then again, I am a single Mom.

Hayyyy ....
on October 26, 2013
Email ThisBlogThis!Share to TwitterShare to FacebookShare to Pinterest
Labels: Family and Friends