I recently talked to a guy who admitted that he had about 2-3 girls on his phone who were on call. When I asked what that meant, he said that these are girls he calls after 10pm for one reason and one reason only.

He seemed like such a nice guy. Apparently, even nice guy can be major douchebags. When I told another guy friend of mine about this and asked him if he actually had the same roster of girls on his phone, he actually browsed through his phone book and started counting. After a minute or two, he then cheekily and without rancor admitted he had about 5. It's insane. I can't believe that some of my guy friends who I thought were nice guys were apparently not so nice. How is it that they have a list of women who were at their beck and call? It's crazy.

Naturally, the next thing I asked was how do they determine which woman becomes a booty call and which one goes to the "I can date her and make her my girlfriend" list. My friend said that the ones who go on the booty call list are the girls who always messages first and eventhough he doesn't reply and just seenzones them, they still message him every single day.

I could do nothing but gasp at how appalling the whole thing was. I'm just glad that I have never fallen into the booty call category and that every guy who has ever attempted to place me in this list has come to realized that I do not belong there.

How about you? Are you currently on call with someone or do you also have anyone on call? If you do, here's a few commandments to follow. 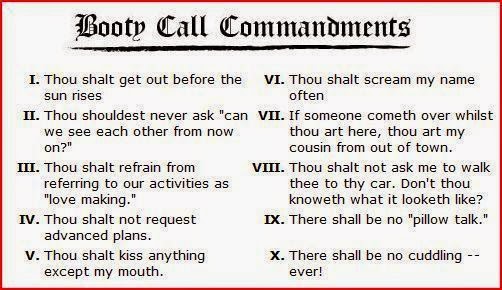 on January 07, 2015
Email ThisBlogThis!Share to TwitterShare to FacebookShare to Pinterest
Labels: Relationships