on August 31, 2012
I saw this restaurant almost a year ago and was very curious as to why it was jampacked on a Wednesday night with the skies raining cats and dogs. I remember thinking to myself that it was probably really good to get that kind of crowd going.

I left the place and I completely forgot about it. Almost a year later, I was lucky enough to score an invite to do a review on IMCKavino.

Normally, I do not read other blog posts about a place as I did not want my expectations set but with IMCKavino, I broke this rule. Initial reaction upon reading an entry was, "What?!?! Php388 for 4 pieces of Takoyaki? Are you insane?"

So, I trooped to IMCKavino with a bit of bias and with expectations fully controlled. In my head, I thought it was just another Chinese restaurant that was aiming to be first class.

When I got to the place, I was not that impressed with the interiors. It was pretty okay and cozy but then so were other restaurants. I was however impressed with the staff. Whenever I would take photos, they would ensure that everything was just perfect. It showed me that they liked their job and they cared.

This matters because it means that they are treated right and that matters to me. 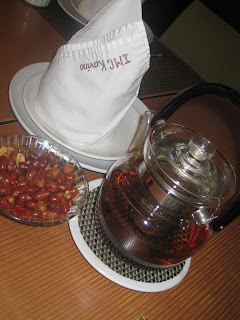 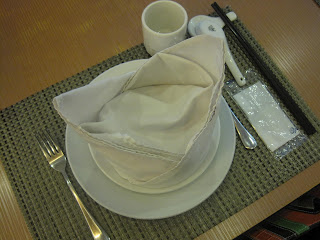 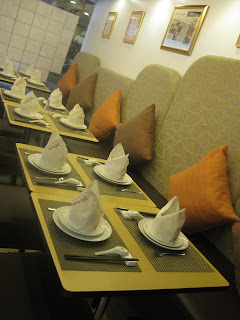 I also had the opportunity to meet the owner and the chef of the place and of course, I couldn't resist having my photo taken with them. 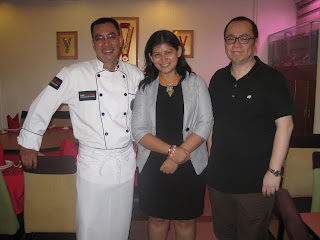 When we were finally sat down and drinks were ordered, the feast started coming in one by one. And what a feast it truly was.

First to be served was the infamous takoyaki. When I initially saw it, I thought to myself, "Oh! It's just lettuce with takoyaki stuff on it." When I took a bite, I was transported to heaven. Yes, I was transported to heaven. It was a combination of bonito flakes, cuttlefish, squid, rice paper, red paste, and mayonnaise. It was heaven on a lettuce.

IT WAS SO GOOD! In fact, I'd willingly go back to IMCKavino just for their Takoyaki. Priced at Php388 for 4 pieces, it is SO WORTH IT!

Gah! I'm still salivating just at the thought of it. 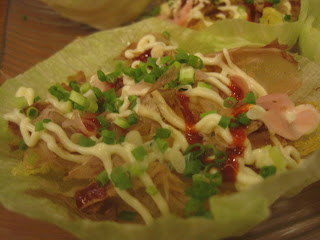 Next came the Chicken Buns and though it looked like your typical siopao, the taste brings you back to the way bola bola siopao was cooked during the 80's with a hint of veggies on it. Wilson, the owner, also mentioned that though it is called chicken buns, it is actually ground pork that is found inside and it is the original version of the bola bola siopao.

The third to be served was something vegetarians would love. It is called Vegie ala Beijing. It is the vegetarian version of their peking duck but I could honestly taste the peking duck though it wasn't there. 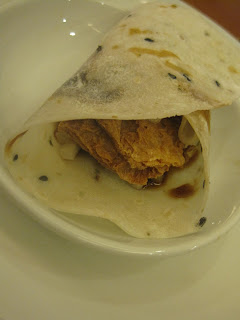 Then came the soup and what they serves was the Pumpkin Puree Soup with Mushroom. Priced at Php100/cup, it was actually pretty much worth it. It contains not only pumpkin puree, mushroom, but also shrimp, cream dory, and squid. No wonder it's Php100 per cup. 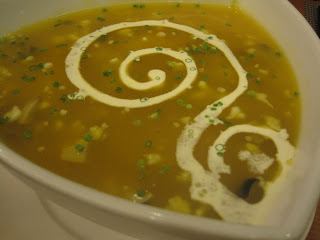 They also served us Kingdao Spareribs with Chinese wine and mayonnaise. I remembered FM since spareribs is one of his favorite meals. It was served in a heart platter which endeared it to me but after one bite, I loved it even more. The meat was soft and chewy, the sauce complemented the taste. It was bliss in every bite. I did prefer the mayo over the Chinese wine. It was sweeter. 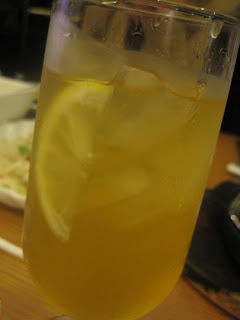 They also served us the Drunken Chicken (Php498) which is a tastier version of the Hainanese Chicken, 3 Cup Chicken (Php388) which was tender and juicy but nothing really impressive, Prawn wrapped in Salted Egg which I personally didn't like because I do not like spicy food but the fried kangkong that came with it does make up for the saltiness of the eggs, and Grilled Mushroom which I wasn't able to enjoy much because I was already so full.

For desserts, they gave us Malayan Cake (aka puto, Php108 for 5 pieces), Snow Ball (Php120 for 4 pieces) which was sticky rice with munggo inside, and Coconut Taro Black Rice Sago which was complimentary. 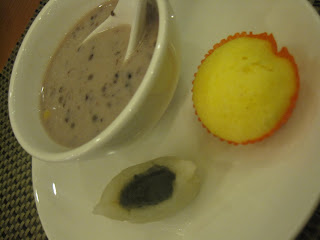 Overall, I was very happy with Chef Kavino's creations. Almost everything was really good and the prices were just right. It may seem a bit steep but really, its worth it.

Almost a year later, I left the place and I can guarantee that I definitely won't be forgetting about it anytime soon. 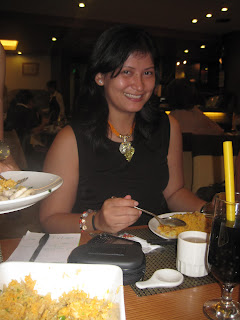