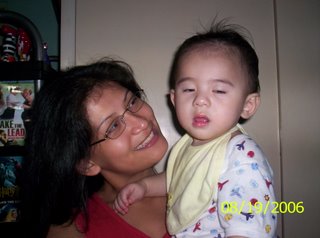 may I always remember to hug, kiss, play, and dance with you

The sunlight embraced me, waking me with the sweet promise of spring. My lacy white drapes were drawn back like curtains on a stage, displaying the first radiant, clear, blue sky in three months. I drew in a deep satisfied breath and was filled with an eagerness to start the day. I leaped out of bed, and screamed in pain. It was the sharp edge of my four-year-old's jumbo Lego piece. But it mattered little. I gathered my crumpled self off the floor. The sun was lighting up my room and inspiring me, so much, in fact, that I headed downstairs to do a workout video. I needed to feel like a part of this day, full of life.
Four minutes into my routine I was feeling great. I was about to grapevine to the left when a groggy-eyed eight-year-old appeared on the stairs.
"Hi, mom."
"Hi." I panted. I kept going, annoyed, yet not deterred. Out of nowhere, my four-year-old suddenly flew straight into my legs with an excited shriek. I stumbled out of sync with the perfect blonde on the screen.
"Get off." I wheezed, "Go eat." Fewer words, less loss of energy. My eight-year-old, Molly, stumbled down the stairs and stopped, mid-yawn, staring with amusement.
Kelly twirled and knocked into my legs.
"Mama, can I dance with you?"
"No." I gave a pleading look. "Molly, make breakfast for you and your sister." She nodded and dragged Kelly, who started squealing, into the kitchen. I blocked them out as they banged cupboards and dropped silverware. I focused my concentration faithfully on the perfect blonde doing rock steps to the left. Minutes later a loud thud shook the ceiling. Angry bellows followed.
"Bo dive-bombed out of his crib," Molly hollered from the kitchen. Frustrated, I snapped off the TV and went to tend the man-child.
After being plunked into his high chair with a pop tart, I switched on the radio news hoping for a small glimpse of the free world on the outside while I did dishes.
Bo began fussing so I gave him a spoon and a cottage cheese lid to play with, and then began re-organizing the refrigerator.
"Mom, will you play a game with me?" Molly asked.
"No," I said slowly, as if I were actually considering it, "I have a lot to get done." I smiled and gave her a quick pat on the head, "Maybe later."
Not a minute passed before Kelly was in my face holding up her favorite book.