food for the gods 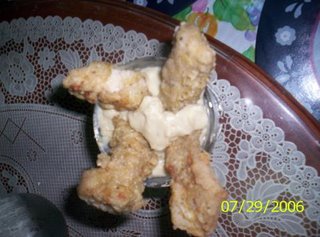 I tried my hand at cooking once more after a long sabbatical from the kitchen. I don't know. It's been a while since I actually dabbled in anything but I saw this recipe on a magazine and it seemed interesting and easy to make. So above is a picture of my creation. I say creation coz I didn't really follow the recipe per se save for the sauce part.

Marinade 1kg chicken or pork in calamansi sauce, meat tenderizer, black pepper, salt, and sugar. All of this depending on your taste. I didn't actually use any measurements. Sort of just sprinkled here and there. Oh, and add 3 eggs. Let this sit for 3 hours so that the taste will really seep in.

Then prepare 4 cups of flour sprinkled with black pepper so that the cover will have a bit of spiciness in it.

For the sauce: 1 cup water, 1 cup evaporated milk, 1 small pack of cream of mushroom sauce. combine all of them and cook until sauce thickens. Low heat and never stop stirring unless you want it to become lumpy and burned. Never a good thing.

Before cooking the meat, cover it with the flour thingie you have and deep fry in a really hot pan. When it's golden brown, it means its cooked. Presentation is all up to you. I chose to put the sauce in those dessert cups and stick in the chicken fingers. It was well received and consumed in less than 15 minutes.

Yey! So for those who will be trying this out, lemme know by leaving a comment here okay?
Food and Drinks