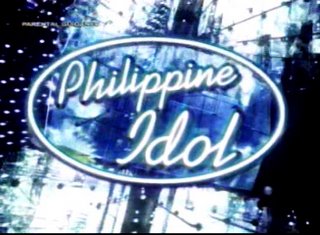 Since Philippine Idol started, our lil family (my in-laws and us) have been able to bond over watching it on Sunday nights. We get to spend quality time together while watching it and laughing at some of the silly antics of the contestants. We'd also ooohh and aahhh at the magnificent voices of those auditioning. Some of them were really good while some were so-so.

A few side notes though.

We hate DIVO. (I'm not even gonna bother linking him up since he doesn't deserve it.) I mean, who is he anyway? The one who sang Somewhere in my Past? Represented the Philippines in a contest? So? That doesn't give him the right to bash Philippine Idol. Can we just say bitter?

We are lovin the following:
1) Kenneth "yoba" Alonzo - its sad that he did not make it to the final 24 though
2) Armarie Cruz - the belter ... man, she's good and her voice is so strong
3) Maureen Marcelo - the one in dreadlocks ... dang ... she's something ...
4) Paw Chavez - the tomboyish girl who reminds me of Aiza Seguerra
5) Erika Bautista - the hearing impaired one who can really carry a tune
6) Jelli Mateo - the one who's real pretty
7) Stephanie Lazaro - another belter

Lovin them and hopin that they get to the final 12. =p

* Saturday, 8pm, Channel 5 they will show the performances of the 12 guys and Sunday, 8 pm will be results night. Please support them. They're really good.
Everything Arts