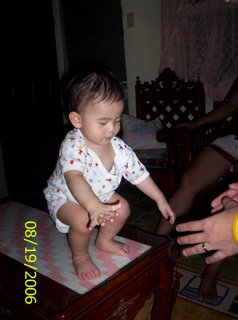 I was in my room yesterday watching a showbiz talk show when I heard my lil boy screaming. Being a Mom, I imagined the worst happening. Did he fall? Did he wound himself?

Lo and behold, what I saw made me want to strangle my hubby. Look up at the picture above and yes, that is my son, standing on top of the living room table and was being asked by his Dad to jump. Mind you, JUMP! He's only 13 months old. Argh!

Of course, Brent took after his Mom and decided to sit instead of standing up because he still wanted to live. Dad would force him to stand up and he would sit again. Eventually, he started to get frustrated that he ended up pulling his hair.

Poor baby. And the sadistic father was laughing the whole time. Even Lolo was laughing. Hmpf!

After a couple of minutes, and I think due to the fact that baby looked pissed off as hell, he jumped. My heart stopped beating for a minute. Seriously. Then I was able to breathe again when I saw that his Dad caught him in mid air.

And so life was back to normal but I did tell hubby that next time he does something like that, I will chop him to bits and pieces. Hayyy ... just another day in my crazy life.
Family and Friends