the second time it happens ...

We fell in love the first time and never even planned on it. It was just a date, a laugh, some phone calls. It started, it stopped, it started again until we regularly saw each other. You were wary and I admit, I was too. I felt like you liked me and sometime, I felt like you were avoiding me.

You were being careful. You didn't really want to get into anything but you were open to the idea of it. So we dated and hanged out, got to know each other, and fell without even realizing it.

One night, it just happened. You became my boyfriend and I became yours.

A year later, it unhappened.

You broke up with me and it was like you turned into a stranger overnight. I still call you especially when the laptop has user problems or now that my phone decided to just kill its memory. I don't know if fate is mocking me by killing my tech gadgets, knowing fully well I'd be running to you since I'm no tech genius or if its helping me by giving me reasons to call you. Either way, I'm happy that you take in my calls.

It feels like how it was before. I liked you and I'd muster up the courage to text you, tweet you, FB stalk you, or call you for any inane reason. Except now, I know that you are really going out of your way to avoid me because you feel something for me still but need your space. It makes it harder.

Now I wait for the day when it would be you who would call and who would invite me out. I realized that when we were initially dating, I kept asking you to accompany me to places and you were always busy. Later on you admitted to avoiding me because you were starting to really like me and you wanted to take it slow. I feel that we are in that phase now.

I keep sending you shoutouts on twitter and you know that its for you. However, you do not respond. You've also told me that you'd decline my invitations and so I must be careful where to invite you.

It pains me more than you'll ever know. Yet, it also gives me hope that one day, you'd find yourself picking up your phone, looking for Geometry, and calling me to ask if I'm free for dinner. I just hope I can contain myself and not scream "EEeeeekkkk!!!!" over the phone.

You see, the second time it happens ... the second time you fall in love with me again ... I can GUARANTEE you 100% that it will be forever. You will have more than a billion reasons to smile because I now know what you need and deserve and I am more than willing to give it to you. You will see that the changes you have been seeking is already there. You'll be stuck with me until you pull in your last breath and I'd be holding your hand, ready to follow you to eternity.

The second time it happens .... it will be real and a whole lot better. 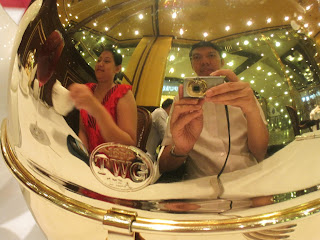 The best of romances,
Deserve second chances
I’ll get to you somehow
‘Cause I promise now