Honestly, before today, I had no idea who Michael Martinez was. If you had asked me if I knew him, I would have given you a blank look and said, "Michael who?"

Thankfully, that all changed today and I had the wonderful chance of meeting the 16 year old Michael Martinez, our country's #1 Filipino Figure Skater. Worldwide, he currently ranks 19 and has won gold medals in international competitions.

As of February 2013, he finally reached the 19th ranking worldwide through wins made during his participation in international figure skating. Martinez is currently training under legends like Ilia Kulik and John Nicks, both well known and well respected in the skating field. Philip Mills serves as Martinez's choreographer and has been of great help in landing Martinez in the top 10 in world ranking. 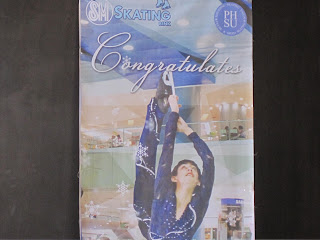 Below is a cheque given by SM Ice Skating to help fund Martinez' training in the US to ensure that Martinez will eventually bag our country a gold medal during the Olympics. 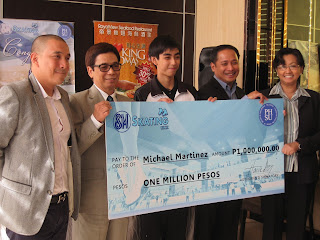 Here I am with a future Olympic medal awardee, Mr. Michael Martinez. 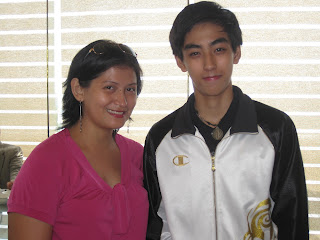 Watch this amazing yet humble kid in action here.

If you would like to donate funds to help this kid land us a gold medal at the Olympics, you may contact the Philippine Skating Union for details.
on April 24, 2013
Email ThisBlogThis!Share to TwitterShare to FacebookShare to Pinterest
Labels: Lifestyle and Events