Chillin' with the Boys

on April 06, 2012
We were stressed with everything happening at work. One day, we decided to chill and relax. Of course it was a foregone conclusion that we would get lost; E being the novice driver that he is in Makati, it was a no-brainer. So while we were getting lost in Makati, I took a shot of us. 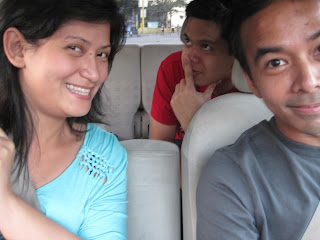 See? We were still laughing eventhough we have been going around for more than 30 minutes in the much deserted streets of Makati since it was a Holy Week.

We ended up in a bar somewhere near A-Venue Hotel. Finally, we met the one we've been wanting. TA-DA! 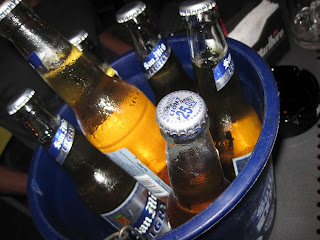 Hahahaha. Yep, we went drinking to unwind. I had a bottle, they had 2.5 each. We also ordered Yang Chow where I had 2.5 plate and they had 2 each as well as Tuna Sisig and Sweet and Sour pork. Obviously, I was dead hungry because I don't even have a photo of the food. By the time we had dinner, it had been 8 hours since my last meal.

We chatted mostly about work, business ideas, and the lack of a lovelife for them both and the fact that I finally have a lovelife. It was a fun night albeit a bit time limited. We had work the next day so we couldn't stay out too late. Still, I had fun chillin' with the boys and I'm really glad that I have these two cool guys to hang out with from work. 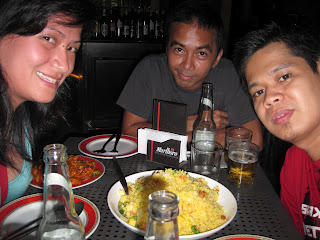