I was coveted ... but I was never wanted.

I was not the girl they could commit to. I just wasn't. Either they couldn't ... or they weren't ready to be in a relationship.


It hurt but I never let anyone see that. What they saw was someone who was enjoying dating around and fleeting like a butterfly in a garden full of roses ... or thorns.

He didn't mind that I blog him. He posted on his facebook that we were together. He introduced me to his family and friends. He wanted me. He was proud of me, OF US.

A few months ago, I posted this on my wall.


I completely forgot about this until FM liked the photo and pointed it out to me. He was my 6th. And so, today, I edited this to make it more fitting. 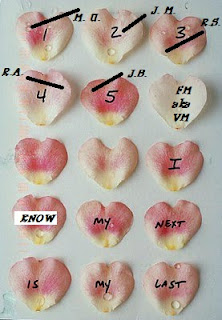 We talked one time about what could make us fight badly. We couldn't think of one. You see ... we like the same things and have the same thoughts about how relationships should be. I know its too early but I just have a good feeling about this.

I know that my 6th is my last because he will be with me until the day we die.
Relationships