It's been over a year. 2012 was a pretty good year for us wasn't it? Unfortunately, as they said, some good things never last. This one didn't either. I thought it would.

He left heart. Stop fooling yourself that he's still there. He's not. The funny man you fell in love with is no longer there. He doesn't exist anymore. He's gone. He's hiding somewhere, licking his wounds.

The funny man forgives and loves you. He accepts you for what you are, flaws and all. This one right now, he thinks of himself. He doesn't care about your feelings. Sure, he helps you but till a certain extent only. Sure, he feels guilty but he continues to do what he wants. He loves you yes but he doesn't love you enough.

You need to accept that heart. I know you love him. I know you do. He doesn't love you though. He no longer does. He can't love you coz in his heart, there is only fear.

Accept it and move forward heart. The man you love with all your heart and life is no longer there. Accept it. Stop this pain we're feeling.

Please. Stop it. It hurts too much. It's consuming me and I cannot be consumed with this kind of pain. I still have B. I have a Mom who hurts for me and a sister forced to mature to be there for me. I have friends who hurt because I'm hurting. I cannot continue hurting for a guy who can't care that he hurts me because he's consumed with his own pain. We need to stop heart.

We really need to.

If he ever gets the courage to love you again, we wouldn't know. Until that happens though, please, love me first. Love us. You can still love him, but keep it to yourself. He doesn't need to know about that anymore. He doesn't care anyway.

So please stop heart? Please? For both our sanity's sake. Let him go for real ... if he finds his way back to us, then you know he really loves you and if he remains in hiding, then we both know that the love he had for us wasn't strong enough.

Let go. We both need to. He needs this and I need this. Let go. He's already left anyway. 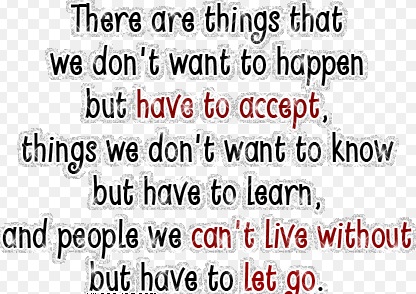 on June 16, 2013
Email ThisBlogThis!Share to TwitterShare to FacebookShare to Pinterest
Labels: Relationships