FM has never been the type to execute surprise dates. He's just not the type and he's not into these kind of things. I've actually stopped hoping that he would do one since its been almost a year that we have been together.

Today, he proved me wrong.

It was a bad day at work for me. Things were not going as planned and there were many challenges that I was facing. To top it, someone said something that I felt was offensive. I felt that my work was being undermined and unappreciated. I left the office in a really foul mood.

When I was walking towards the bus stop, I received a message from FM asking me to call him when I was en route. Since I was in a foul mood, the conversation did not start right. To sum it up, the first 50 minutes of our conversation was just pure bickering and negativity on my part. FM was nice and patient the whole time.

A few minutes before I went down on my stop, we patched things up and I felt much better. While I was walking to my last ride, he asked me to stop walking. I immediately did but wondered why he was asking me to do so. He then told me to get inside his car and that was the only time I learned that he was actually parked at the corner of the street where I'd normally go down.

Earlier I told him that the only surprise I needed was for him to show up at my house and he said that it wasn't possible. Being the not so nice person that I was at that moment, I replied, "yeah, you'd never do that. You never do that."

Well, I was wrong. And I am very happy to have been wrong.

We had dinner at Hagasawe which is a Japanese place inside our village then we had a full body massage at Bliss Spa. I am in heaven. I am such a lucky gal. Seriously. I have a man who wants nothing but to make me happy. 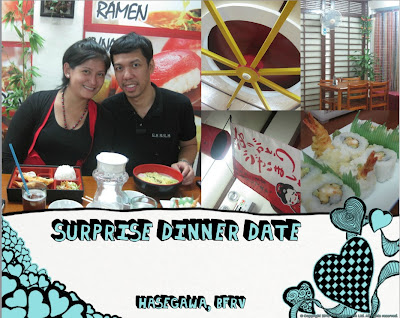 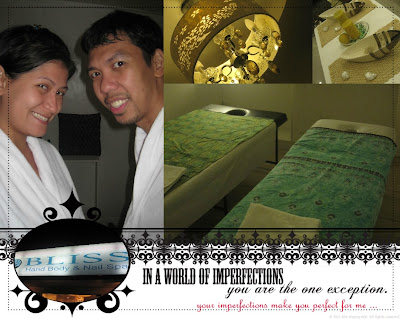 Again, thank you FM for this wonderful treat. You were right. I will be sleeping with a smile on my face. Thank you. I love you.
on February 06, 2013
Email ThisBlogThis!Share to TwitterShare to FacebookShare to Pinterest
Labels: Relationships