I saw this place in En Route's blog. I saw the pictures and read her review about it and promptly fell in love. The only problem that I saw was that this was in Tagaytay and I don't have a car. Today, that was fixed by a good friend of mine.

Here is my story of my affair with Marcia Adams Restaurant and how they sent me to Tuscany without ever leaving the Philippines. 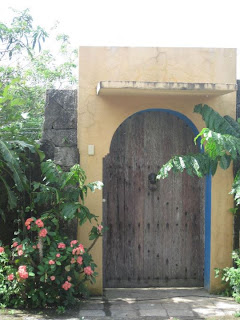 Who could have thought that behind this quaint door lies a haven that will leave you wanting to stay for hours and imposing on the gracious host and hostess, Marcia and Neil Adams? A side entrance leads to a downward path and here, the magic begins.

I felt I was Alice in Wonderland but instead of landing down a rabbit hole (ugh, did I say rabbit? I will explain in a bit why I have an "ugh") I was transported to a jungle full of bright flowers. The garden is worthy of being put on display in Metro Garden or Home and Garden but it is the interiors that took my breath away. 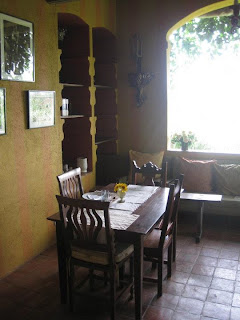 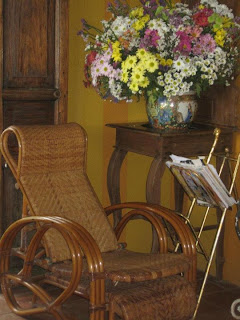 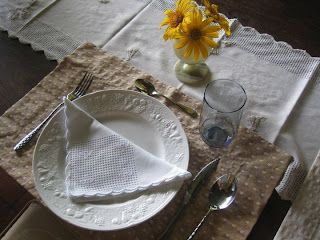 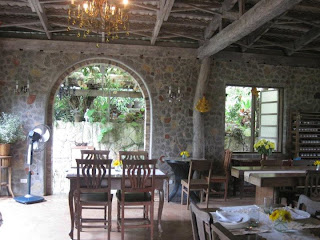 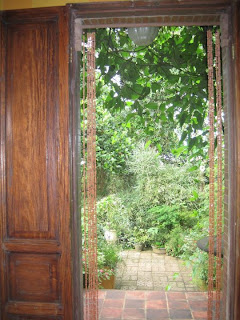 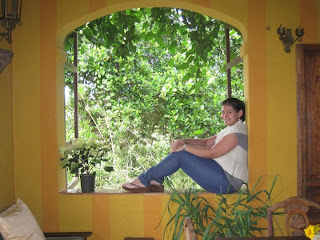 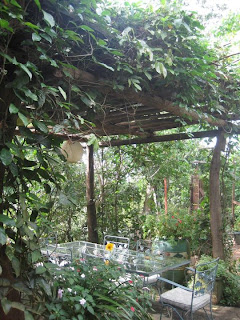 See what I mean? The ambience and the view fills your eye with such a sight. My friend and I actually caught ourselves staring off at the different parts of the place and just marveling at how lucky we were to be there. It was so relaxing yet energizing at the same time. I felt like I wasn't in the Philippines and was actually in Tuscany. In my head, I saw myself wearing a dress, barefoot, dancing and eating grapes straight from the vineyard.

Now the food ... the menu can be seen here. Still, a photo of what you can get is better right? We ordered the following and dare I say that the prawns and the dessert were the best. The rabbit, yes I ate rabbit for the first and last time in my life amidst images of Thumper looking at me playing in my head, was a surprise. It was like eating hard chicken. It was juicy and tasty but I can now say that I can definitely go through life without ever eating rabbit again. Chickens rule!

Speaking of chicken, my friend ordered Spanish Chicken and either he was really hungry or it was that good because he finished it even before I got to half of my rabbit.

These were our main courses but the highlight for me was actually our appetizers. I wish they would make a main course out of it. It was SO GOOD.

This was succulent. It was tasty and it just bursts into flavors inside your mouth. It was an assault on the senses, but in a really good way. It was too little. There were only 3 and I swear, I could have eaten a dozen. Sigh. It was so good.


I didn't like the Panna Cotta so much because I'm used to sweet panna cottas and this was a bit tangy for me. I fell in love with the fried bananas though and consumed the entire chocolate dip. Seriously.

However, most restaurants can boast of having an equally great ambiance and food. What they cannot boast about though is the personal touch of the owners. Neil and Marcia took time to sit down with us and talk to us about how the place started and ask about what we do as well. It was an afternoon chat that endeared the place to me and sealed its mark on my foodie heart.

The chat we had with them and the genuine fondness they have for what they do made it not just another restaurant but a home that would welcome me anytime I would want to drop by. I know that they won't forget me because Marcia actually remembers my friend who wrote about this place. It showed me that they make it a point to really get to know their guests and this is why, even though they have no ads, Marcia Adams is fast becoming a well loved country farm restaurant diner. 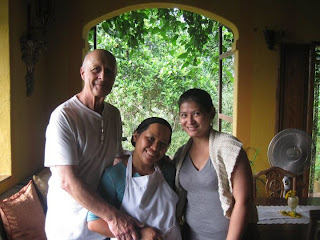 Thank you Neil and Marcia for making me feel like I have found a home in Tagaytay.

To know more about them, visit their Facebook Page, Marcia Adams Restaurant.

on December 19, 2011
Email ThisBlogThis!Share to TwitterShare to FacebookShare to Pinterest
Labels: Food and Drinks