a series of wrong turns

I felt all giddy at the thought of meeting him, much like when I was about to meet kitkat. I actually kept saying it over and over again in my head. He reminds me of Kitkat. I didn't know if that was a good thing or a bad thing. Much like with everything else, I crushed the nagging voice in my head and went off my merry way to meet this guy.

It was a wrong turn right from the start. I told him to meet me in front of the church and he picked me up on the other side. I had to walk in the blistering heat and I hate walking. By the time I got to his car, I was sweaty and flushed. I should have been bothered but I was literally too hot to give a care.

We had lunch and when we were about to go to the parking lot, we took another wrong turn. He liked leading and was walking ahead of me which was a bit irritating and I noticed that he was going the wrong way. I called his attention. We laughed it off.

On our way to see my friend, we took another wrong turn which added more travel time. I wouldn't have minded so much except talking to him in the car at that point was like pulling teeth. I tried to think of conversation starters and he would either give this disarming smile or answer with one sentences. It was funny at first but it became frustrating in the end. Luckily, this lasted for about 20 - 30 minutes only. He started talking again.

After the meet up with my friend which apparently he found boring, we went on our way. He was going to take me home and was trying to avoid flood and traffic. He took 2 more wrong turns. This whole time though, we were just laughing. He kept tickling me and I kept trying to stop him. Looking back, it was sweet and I guess a bit flirty if I may say so.

I just find it funny. A series of wrong turns allowed us to get to know each other a bit more than we initially planned. The question now would be, is he the right turn or will he be just another wrong turn? 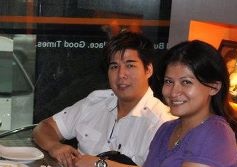 on December 04, 2011
Email ThisBlogThis!Share to TwitterShare to FacebookShare to Pinterest
Labels: Relationships