parenting tips from the funny man

Last night, I saw my son playing with the minion toys all by himself. He was role playing and had lines for them which made me smile and which made me really happy. You see, before, he didn't know how to do those role plays. 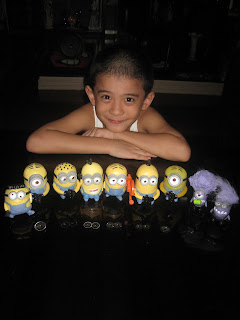 B may be book smart but it definitely doesn't hurt that he also knows how to use his imagination now.  I love seeing him invent things and lines while playing with the minions. It was adorable and I am thankful to the funny man that I have these moments.

The 2nd lesson I learned from the funny man is to let B play on the streets of our village and to not be overly concerned if his knees get scraped or he gets slightly banged. You see, before, I would never let B play on the streets. I would freak out when he gets small wounds or scrapes his knees. Due to this, I wouldn't also let him play in the grass because I feel that there will be small insects and poop. FM told me to just let it go, my need for B to always be clean and scratch free.

He said that to allow B this freedom is to make him stronger when he grows up and to allow him to have a more fun childhood. I was initially resistant to the idea but have since learned that B  is indeed better off running and sometimes, getting small scrapes. How can he learn to deal with the pain of a wounded knee and to avoid getting wounded when he doesn't know what it feels like to be wounded in the first place?

The 3rd lesson I learned is that screaming will not get me anywhere with B. In the 13 months I was with FM, I don't think I have ever seen him shout at his kids. He gets mad, yes, but he never yells at them. It was actually quite a marvel. He told me that there was no point to screaming or shouting because it won't get you anywhere. However, if you explain or get the child to realize why what he did was wrong, it works better.

The 5th and last lesson I learned from FM and this is the most important is that I should just learn to let go of things when it comes to B. If he made a mistake, let it go. If B leaves a mess, just remind him to clean it up. Basically, chill and breathe.

Things are better now with B and I ... a lot better. He's more well rounded and he's more creative and free in the way he handles things. I love what I see in him.

Thank you FM for making me a better Mom to my son. As I told you, I'm not a great Mom or the best Mom but I will always do my best and work my hardest to be the best that I can be for B. 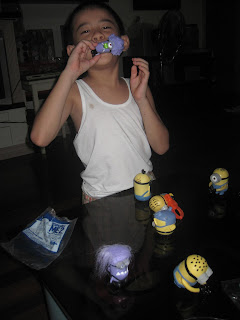 on July 02, 2013
Email ThisBlogThis!Share to TwitterShare to FacebookShare to Pinterest
Labels: Parenting