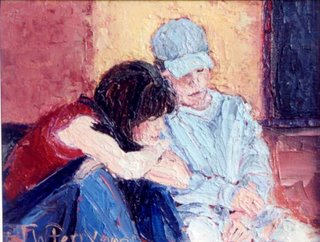 This is a series of love stories that happened to me. Enjoy the stories. Laugh and cry with me .. learn lessons ... and always remember that you should never give up on love, no matter how many times you got hurt.
I met him when I was in first year high. I just transferred from one of the most prestigious Chinese school to one that I considered beneath me so I was not too happy about the change. He was sitting beside me in class and I could not help but think, No way! This is not happening to me! I couldn’t possibly be sitting beside that guy for an entire year.

It turns out I was.

We never got along. He would cheat on my papers and I’d turn my snotty nose on him. He would then get back at me by saying I was a fat Indian princess. I wanted to hit him. I held back. He was beneath me.

Then one day, we saw him at the canteen eating by himself. He was so poised; so dignified. I started admiring him. I think that was when I started having a crush on him. So I did what any normal 15 year old girl would do. I called out to him and said, MUKHA KANG BAKLA! (you look so gay!)
My god! You should have seen the look on his face. He went after me and I ran so fast coz I knew he was gonna try to kiss me. No way! Eeewww … that’s what I thought.

This cat and dog fight went on for several months. One day we’d be a bit okay and the next day, at each other’s throats. Then came our Christmas Fair. We had a booth wherein for a certain fee, you could get two people married or they get locked up for 3 hours and we had a booth as well wherein you could dedicate a song to someone for a small fee.

So there I was minding my own business, yakking to my hearts content when I felt a handcuff. Yes, a handcuff. Someone paid to get me married to some guy that I can’t even remember now. HE got upset.

He gave me dagger looks and stomped his feet and pouted. I reacted by saying What are you pouting about? You’re not the one getting married to a nobody eventhough this is just a mock marriage. So there I was, 15 years old, getting married. Yikes!

After getting married, my groom and I parted ways. I decided to get some refreshments and as I was sipping the juice, I heard the statement that would change the course of history of my life.

Then Richard Marx’s song Right Here Waiting started playing. And my heart stopped beating.
to be continued
on September 14, 2006
Email ThisBlogThis!Share to TwitterShare to FacebookShare to Pinterest
Labels: Relationships