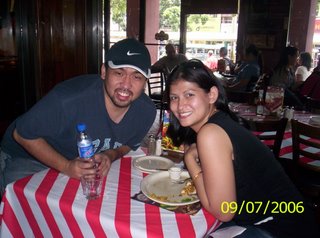 Saw my long time friend from kindergarten yesterday. The meeting was actually just pure luck. I was viewing people's number the other day and I saw that I still had his old number here in the Philippines and I remembered that he said it was a roaming number. He's in Canada now; hence, the roaming status. So I tried calling it since I have not spoken to him in almost 2 years and I wanted to know if it was still the same number.

It rang. I panicked so I hung up. Then I called again and HE answered.

So we talked after some "you bastard! why didn't you keep in touch with me!?!?" then he said that I was so good at timing. Apparently, he's in Manila as of the moment but going home to Canada today. That was Thursday. So we met up and though there were awkward moments, it felt good to see him again. To be with him again and talk to him. I was with someone who has seen me through the worst times of my life, who knew all my secrets and still loves me and accepts me.

I was with a lifetime friend. And boy did it feel good.
on September 09, 2006
Email ThisBlogThis!Share to TwitterShare to FacebookShare to Pinterest
Labels: Family and Friends