Cheers to the Sperm Donors

Every year, there is one day that is dedicated to celebrating the fathers of the world and though there are many fathers out there who try their hardest to be great Dads, there are those that we call “sperm donors.” These are men who just basically donated their half to create a person and failed to do more than the donation part.


Yes, they exist. Yes, they are real.

Yes, it is very unfortunate but what can we do. To make things easier, let’s categorize them shall we?
These are the Dads who simply work and do nothing else. They think that as long as they pay for everything, it’s all good. They don’t attend PTA meetings, they don’t attend recitals or programs, and they don’t participate in anything in their child’s life. As long as they bring in money, they think their job is done.
These are the Dads who as soon as they find out they got someone pregnant, they go running for their lives. They don’t even bother to stick around and find out the sex of their child. Soon as the pregnancy test shows positive, they become negative and cease to exist.
These are the Dads who can’t stay still with one person. They womanize and end up leaving the mother of their child or have the Mom leave because for them, one isn’t enough. As a result, they become absentee father figures which could be easily avoided if they had stayed true to their partners.
This is the complete opposite of Mr. Bring Home the Bacon. This one is intensely involved in the kid’s life but not in a good way. Instead of being the Dad who cheers his kids on, he is the Dad who fault finds and is never satisfied. He is the Dad who makes everything about him and how your achievements are a reflection of who he is as a person. It’s not you, it’s HIM. When you have these kind of Dads, it can get frustrating when Father’s Day rolls in. After all, there is no Hallmark card that says:


“Thank you for your money. Really appreciate it Dad!” “Thanks for donating your sperm. I exist coz of that.” “Thanks for showing me the effect of being greedy.” “Thanks for making me feel worthless and not enough.” 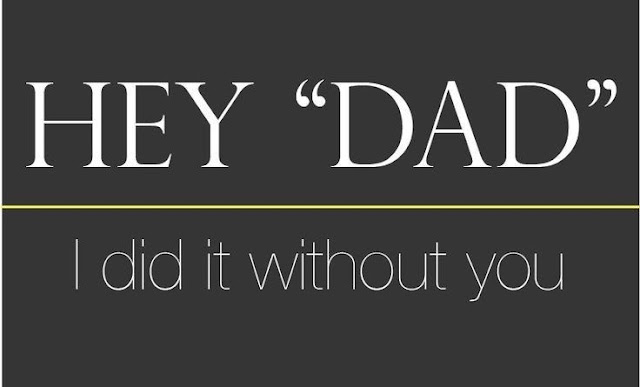 As the millennials would say: the struggle is real. It’s not a laughable matter. It is actually gut wrenching and heart breaking. It is the kind that leaves a mark on you for life but should you decide to use this intense pain to be a better person and not let it destroy you, it will allow you to add steel to your spine. It will force you to make something of yourself and just be a better person overall. After all, they may have helped create you biologically but at the end of the day, it is still your decision whether or not they get to make you who you want to be. Cheers to every child who has had a sperm donor for a father. May the odds be ever in our favor.
on May 25, 2017
Email ThisBlogThis!Share to TwitterShare to FacebookShare to Pinterest
Labels: Relationships