The first goodbye I remember was at school. My first boyfriend was telling me that he only courted me to make his first love jealous. I was nothing but a toy to him. He was just using me. I gave him my heart and he was just using me. It was at that moment that I learned what goodbye meant.

The next goodbye I remember was the betrayal of a trusted friend. She was someone I would tell my secrets to, the fears that I had, my insecurities, and my achievements. I thought she was a friend; I didn't realize she held a knife on her hand whenever she hugged me and she had stabbed me several times. I just didn't know it but she was bleeding me dry.

The hardest goodbye I remember was the goodbye to forever. I thought he was the one. We had a child, we had a home of our own, and we were building dreams together. I thought that his was the face that I would see when I wake in the morning and the last when I sleep at night. I thought that there was nothing in the world that would make me let go of forever.

Goodbye forever. When forever humiliates you endlessly without thought or care, you need to let go. When forever has another forever, you need to rethink your commitment to forever. When you and forever has a difference in opinion as to whether or not you live, you learn that nothing lasts forever. I learned to say goodbye the moment I was about to take my last breath while he was choking me to death. I said goodbye to forever.

The saddest goodbye is during the funeral of people that I love. I know that everyone will eventually die and I accept it. What I find hard to accept is the fact that I won't ever see their smiles again. I won't be able to talk to them and look them in the eye. I will never hear their voice. I will never feel their arms around me. I will never be with them again.

Goodbye life. You are one fickle minded soul. You are kind yet cruel at the same time. You let us borrow people and then suddenly, mostly without warning, you take them away from us leaving us bereft and asking for one more. One more minute. One more kiss. One more hug. One more laughter. One more second. Just one more.

However, there always is that one goodbye that changes you. 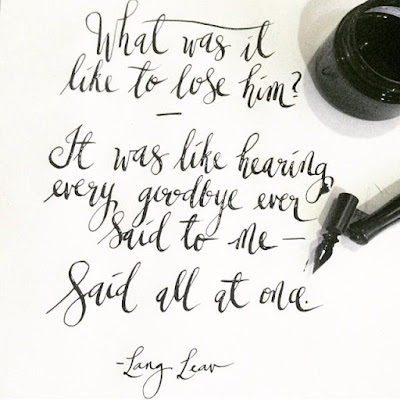 Goodbyes ... always a hard thing to encounter but when they hit you all at once, goodbyes can be the most painful thing of them all.
on October 20, 2015
Email ThisBlogThis!Share to TwitterShare to FacebookShare to Pinterest
Labels: Relationships