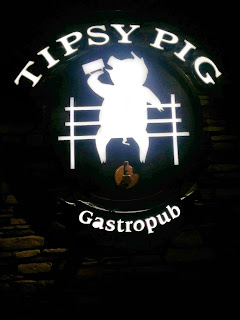 I've passed by this place a couple of times and it caught my attention mostly because of the name. Luckily, I was able to give it a try when FM and I met up.

The place looked cozy inside eventhough it was obviously a gimmick spot at night. We got there pretty late and it was a full house. Thankfully, a table was vacated after 15 minutes and we got the corner spot. 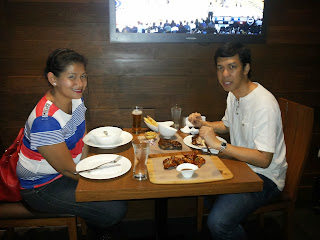 He ordered the ribs which were very soft but lacking in taste and I had French Onion soup which I surprisingly liked. I also tried their mushroom and tipsy wings. I liked both but there wasn't really anything outstanding about the food. It was good but not great in my opinion.

However, I did like the place and the ambience. It was very laidback and the music blasting was very 90's which brought me back to my college days. I also liked the crowd who were mostly A and B class. I felt at home with the people, not out of place though I was quite conservative in what I was wearing compared to them.

I also tried the Salted Caramel Beer which was really, really good. It was salty yet not overly salty. The liquor was also just right. I loved it. I'd definitely have it again the next time I can.

Overall, it was a good night and I truly enjoyed the company of the person I was with.
on November 24, 2013
Email ThisBlogThis!Share to TwitterShare to FacebookShare to Pinterest
Labels: Food and Drinks