I was having a pretty bad day. We just got back from Divisoria and I did not have enough sleep. It was hot, I was sweaty, I was sleepy, and I needed a shower badly.

I was not in a good mood.

He had been hinting of a surprise the entire day. I was curious but I did not want to expect much. Also, I had no idea what he had been hinting about. He just said that it was something that I'd immediately blog about. I told him it was not possible since I had over 30+ backlogs for my blog. He smiled.

We were in his room with R watching the finale of Glee and I noticed that he kept going out of the room. I didn't take heed because I was busy watching. I'm like that. I don't like being disturbed when I am watching a show that I like.

While Kurt was wrapping up his performance of "I'll Remember" by Madonna, he asked me to look at a photo on his laptop. I was mildly irritated to be honest. Still, I looked and saw that it was a photo of the Starbucks Mug Brasil. He asked me if that was the right design for the Brasil mug. I said yes. He asked if it was pretty or if I liked it. I said yes, it was nice. Then he asked me if the mug in the picture looked exactly like the one behind the screen of the laptop and then he pushed the monitor of the laptop down and there it was, an actual Brasil mug.

I was ecstatic. I couldn't believe he was able to get me Brasil. I think I semi-jumped from my seat and hugged him. I was so happy. I was just really grateful that he made an effort to get me a Brasil mug. I had lost all hopes of getting a Brasil mug because, face it, who goes to Brasil for vacation? Almost no one I know.

I was still reeling from the shock of this surprise when he asked me about Guangzhou. I told him it was easier to get compared to Brasil but still not that easy since it is a province of China and not a city in China. He then asked me to turn around and there was a Starbucks Citymug box lying on the bed behind me. He got me a Guangzhou mug.

It did not end there. He showed me a picture of Foshan and there it was, sitting on the other side of the bed, waiting for me to give it proper love and care. Eeeekkk!

3 new mugs were given to me by FM and I didn't have a clue. It was truly a surprise. He was really able to surprise me and I loved it. I loved that moment.

I thought it was over. I was ready to settle down and watch Glee again when he asked R to give me something. She handed me a white box and voila, inside, was a Macau mug. O-M-G!

Apparently, he went out the night before simply to get me mugs. I am such a lucky girl. 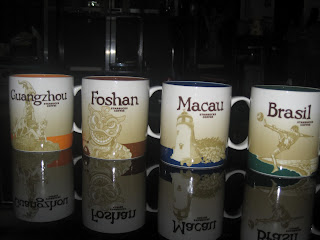 My new mugs. Thank you FM for this wonderful surprise. You were right, I would blog about it asap.

I was definitely in a good mood after this.
on May 25, 2012
Email ThisBlogThis!Share to TwitterShare to FacebookShare to Pinterest
Labels: My Thoughts & My Life