Let them Be Wrong

Sometimes, you just need to allow people to be wrong. 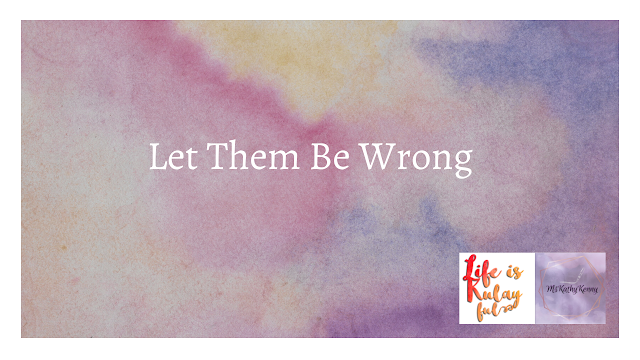 When people judge you without getting to know you, let them. Don't exert effort to correct them in their preconceived notion of who and what you are. Let them be wrong.

When people say bad things about you without any basis just because someone else said so, let them. Don't beat yourself up with their opinion that you know has no basis. Let them be wrong.

When people break friendships because they believed someone without verifying with you first, let them. It may hurt because you are already invested but if they don't think your friendship worthy of being fought for, don't fight for it either. Let them be wrong.

When someone you love breaks your heart for no good reason or because they think you did them wrong, let them. When someone has decided they are done, it's never a good idea to beg and force them to stay. Even if you love them, let them be wrong.

You know what you are capable of, what you did, what you didn't do, and what you can become and achieve so let them be wrong. Let them think what they want and continue to be great.

Let them be wrong. Eventually, they will realize that all along, you were right and they were wrong.

on February 01, 2021
Email ThisBlogThis!Share to TwitterShare to FacebookShare to Pinterest
Labels: My Thoughts & My Life