USE CODE MSKATHYKENNY for 10% OFF WHEN YOU BUY FROM THE ONE CHAMPIONSHIP SHOP
In the midst of a pandemic still seemingly gaining strength, global quarantines and numerous sports cancellations, ONE Championship (ONE) is defying the odds to bring fans four Singapore shows and a groundbreaking reality TV competition.

Starting April 17 through May 8, 2020, ONE Championship has lined up four events with inspirational show titles to lift the spirits of martial arts fans worldwide and provide the same outstanding entertainment. 'Hope', Strength', 'Dreams' and ‘Inspiration’ will be held on April 17, 24, May 1 and 8, respectively, behind closed doors but will be live streamed to be accessed for free by a global audience. 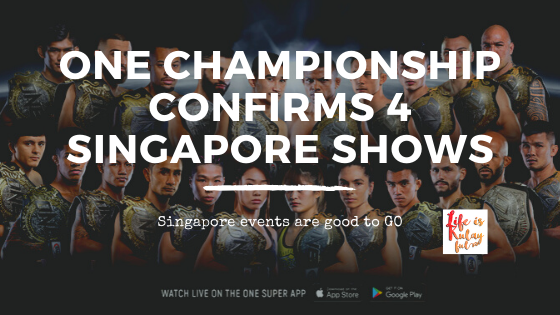 ONE Championship successfully experimented with behind-closed-doors fights at Singapore’s Indoor Stadium last February when the Coronavirus was just beginning to raise major concerns. Most sports organizations like Major League Baseball (MLB), the National Basketball Association (NBA) and the English Premier League (EPL), among others, stopped action altogether as the harsh reality of the pandemic began to hit home. Conversely, ONE Championship found a way to see more action and provide martial arts fans something to look forward to during these bleak times.

ONE Championship was business-as-usual on February 28 as ONE: ‘King of the Jungle’ took place in its new no-live-audience format. Although no one knew quite what to expect that night, the result was an absolute sizzler that saw Janet Todd wrench the ONE Atomweight Kickboxing World Title away from young superstar Stamp Fairtex in the main event. Tiffany Teo also defeated Japanese star Ayaka Miura via unanimous decision and 23-year-old Filipino striker Denice Zamboanga earned herself a shot at Angela Lee’s Atomweight strap with a glorious decision victory over veteran Mei Yamaguchi.

What’s next? Perhaps a Todd-Fairtex trilogy in the near future. Tiffany Teo getting a crack at Xiong Jingnan’s Strawweight Title soon. A Denice Zamboanga-Angela Lee fight somewhere down the line. Those are possible forward scenarios ONE could pursue.

What the February event showed is that a stadium crowd is not necessary to create fireworks. Thanks to the ONE App, millions can still watch the action from the comfort of their homes for free, no matter what part of the world they are in.

Singapore will host four more shows using the same format to enable the sport to continue and provide a sense of normalcy and positivity in the face of the seriously challenging circumstances.

Chatri Sityodtong, ONE Championship Chairman and CEO expressed gratitude to the Lion City for being ONE Championship’s home and for allowing ONE to create jobs and opportunities despite COVID-19. "COVID-19 is an excellent example of how great Singapore is. It is literally leading the entire world in the containment of the virus through process, policy, vigilance, execution, and transparency. With so much uncertainty surrounding the global economy during the pandemic, it’s good to see that ONE can continue to create jobs and opportunities.”

Besides non-stop fights, ONE has one more positive up its sleeve. The announcement that “The Apprentice: ONE Championship Edition” is happening in Asia in the second half of 2020 created a sea of social media buzz with candidates flooding in from around the world to vie for “the ultimate prize of a once-in-a-lifetime US$250,000 job under the mentorship of Sityodtong”.

While COVID-19 has forced many companies to restructure, Sityodtong is determined to champion a bright future for “16 of the best contestants from around the globe” who will join the "high-stakes game of mind, body, and spirit for the greatest job in the world." Sityodtong has suggested he wants to include a martial arts star in the group, upping the entertainment factor of the show even further.

Fans can now follow Chatri Sityodtong on his new Facebook page for "different personal content such as live streams and videos about entrepreneurship, martial arts, life, love, and anything else you want to hear”. “I will also be giving away VIP tickets and other free ONE Championship goodies, " Sityodtong added.

on March 21, 2020
Email ThisBlogThis!Share to TwitterShare to FacebookShare to Pinterest
Labels: Sports & Fitness