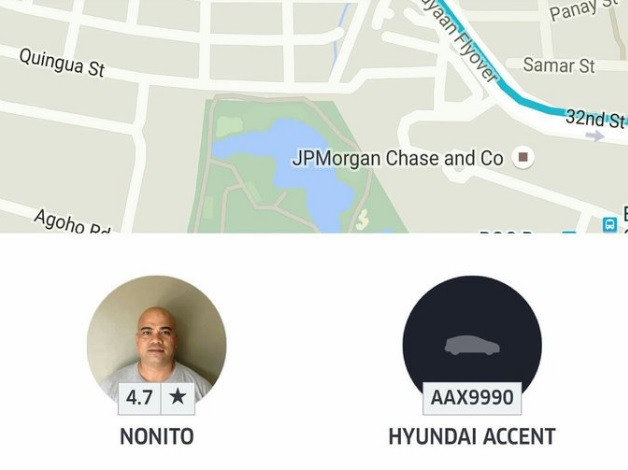 Uber promised a SAFE ride. When you book a ride, you are supposed to get to your destination safe and sound. This is what they promise you. This is why people book it even though it may be a bit more pricey than a regular taxi. Supposedly, you are to get the following when you book an Uber car.

1. No questions or qualms about the destination. You book an Uber car and you are promised to get to your destination safely.
2. No complaints about your destination as long as it is within Metro Manila.
3. Professional attitude from your driver.
4. They will know the way to your destination because they use WiFi and they have Waze.
5. You will not be kicked out of the car or treated with disrespect by the driver.

This is not what happened to my brother when he booked Nonito with plate number AAX9990. This guy was unprofessional right from the start. He was already complaining the moment he saw that my brother lived in the South. He said:

1. I live in Quezon City.
2. He was new.
3. He did not know the way.
4. Give him directions since he did not want to follow what waze was showing.

So my brother did. At some point, my brother repeated an instruction twice. Apparently, this guys had inferiority complex and thought it to mean that my brother thought he was stupid because he became upset and said that there was no need to repeat instructions since he was not dumb. My brother then responded that since he didn't know the directions, he just wanted to make sure the driver heard him. This started a word war ending with the driver kicking my brother out of the car since he did not know how to get to the destination.

After a minute the driver went back to his car so my brother left. When the driver noticed this, he started running after my brother and of course, any sane person would fear for their life when you have a crazed maniac running after you. Thankfully my brother escaped this monster and was able to hail a cab.

My brother then called me and was wheezing. He was having an asthma attack because of what happened.

My brother is now safe at home but we fear because the driver knows where he works and lives. If you know who this man is, we need his name so we can file a report against him. He should now be driving out there. He might be endangering someone's life.

This is such a failure on Uber's part. Their screening process of drivers need to get better again. This man was violent and unprofessional; uncouth and rude as well. He should be taken off the road.

PS. We posted and asked via social media because per privacy protocol of Uber, they cannot disclose the driver's name.

Someone from Malaysia called to apologize. Serena of Uber Malaysia said they will cooperate and give us details of the driver last Saturday. Sunday I received an email stating they cannot help because of privacy policy.

This was the last update. I have emailed multiple times. I have posted on their Facebook Page. I have private messaged as well. I have tweeted and tagged Uber_PH as well as Uber_Support. Uber does not care about it's riders. I also checked the reimbursements from previous complaints on my debit card and it never came but that is another complaint and blog post. People need to be aware that Uber as a company does not care about its riders.

Praise God someone finally sent us his full name. A former employer informed us he used to be a bodyguard. Said employer also stated that he always gets into fights and this is why he decided to send us the information because this Nonito can be violent.

We will report this to LTFRB and the police tomorrow. Thank you everyone.

Uber Philippines finally called. We will have a face to face with the driver. Apparently it takes A LOT OF TWEETS, EMAILS, Facebook private messages, SHARES, and this post going semi-viral for them to pay attention. Sigh. Hopefully, we come to a closure.
on July 10, 2016
Email ThisBlogThis!Share to TwitterShare to FacebookShare to Pinterest
Labels: My Thoughts & My Life