on July 16, 2016
Ampalaya Monologues has finally come back to its roots here in Las Pinas after much clamor from the people of the South and they couldn’t have chosen a better venue than Mystic Bew Café located at 511 Capitoline Hills, BFRV. The mystic themed coffee shop owned by Tristan Jovellana played host to the Amapalaya Monologues show aptly titled “How July Live Without You” which is a word play on the national anthem of heartbroken people “How Do I Live Without You.”

Mark Ghosn, the creator of Ampalaya Monologues has written some of his piece here at Mystic Brew which makes this performance even more special. He lives in Las Pinas and today, he comes back to his roots and performs his masterpiece along with the members of Theater in Alternative Platform.

Ampalaya Monologues had two shows scheduled on July 16, one at 4pm and one at 7pm. The 4pm show started a few minutes late because of the influx of people that came in. The duo UNWIND (Paolo and Louie) started the show with a heart wrenching performance of Kahit Kailan, followed by Sam Smith’s Stay with Me, Stigmatized, and another Sam Smith song Lay By Your Side. Anyone who has gone through heartbreak will definitely feel every tug at the heart and say, “TAMA NA! ANG SAKIT NA E!”

UNWIND ended their set with an upbeat song “Shut Up and Dance.” We feel that it’s to give a little bit of happiness to the people in the crowd because once the monologues start, its going to be one cryfest after another.

Leah Garcia from Las Pinas Art Community was the first performer for the spoken word poetry part. Instead of the usual bitter piece, Leah performed a piece meant for those who have finally chosen to move on. “Para sa Aking Susunod na Mamahalin.” Patawad, pakiusap, at pangako (Forgiveness, hope, and promise.) The piece tackles about lessons learned from a previous relationship, things to expect when one gets into a new relationship, and a yearning for better things. This piece was made more special when Leah took a guy from the audience and had him participate much to his shock. It made the piece a lot more relatable which is what makes these kind of shows worth watching.

“Ang Huling Tagay na Ilalaklak ko Para Sayo” was performed by Yan-yan Gervero. This is a piece that anyone who has been cheated on can relate to. It talks about the doubts that one doesn’t want to face, the little things that tell you of what is really happening but you refuse to face because you just can’t accept the truth, and the many betrayals that you feel simply because you trust. You trust because you love and you were betrayed because you loved.

“There’s a Basha in all of Us” was the next piece meant for everyone who was replaced by their best friend. This was performed by Mariko Urimoto. It started with “I’ll Never Go” of Nexus. Mariko performed this while eating ice cream which was very realistic because every single woman has eaten ice cream while nurturing a broken heart. This piece will touch the heart of anyone who has wanted a second chance even where there wasn’t one anyone. This piece will break the heart of anyone who wanted to say “Sana ako na lang. Sana ako na lang ulit.” It is more than apt because this is something that people go through, feel, and survived.

Sometimes it’s okay to not be okay.

3rd piece was titled “Akin ka na lang please” meant for anyone who has been bestfriendzoned. Performed by Yves Gutierrez, this was the lightest piece amongst the three. We know it’s painful to be bestfriendzoned but the attack on the performance made it feel light instead of painful.

“Violet ang color ng Pag-ibig” is meant for those who are martyr’s when it comes to love. This piece was performed by Berna Manipon and tackles the dark side of love. This is the personification of too much love will kill you. This is about love that suffocates, is jealous, controls, and hurts you not just physically but emotionally, verbally, and mentally. This is about abusive love and the people who keep giving chances when there shouldn’t be one.

“Ikaw si Distance at Ako” was the next piece to be presented. This was performed by Euwie Von Loria and is for anyone who is in a long distance relationship. It talks about what people who are in a long distance love go through: Skype dates, Viber calls, and meeting each other online while fighting through caps lock and what not. It talks of hope.

Ano ba talaga? Absence makes the heart grow fonder or out of sight, out of mind.

Grasya Paterno performed “Mga Bulong sa Hangin.” What happens when the one you love leaves this world? What happens when your story comes to an abrupt end? What happens then? What happens now? What happens to the person who was left behind, the one still wishing for one more kiss, one more touch, one more hug? What now? This is the most touching piece by far because anyone who has lost someone knows exactly what it feels. It is the fact that you can never have one more moment with someone that makes the pain unbearable.

“Hanash ng Soloista” is for anyone who is single and was perfectly performed with panache by Janine Leose. This is meant for anyone single who is also the go-to person of those who are constantly in and out of relationships. This is for the eternal best friend, the one who is single but dishes out love advise all the time, and the one who is perpetually in a relationship with food and TV. This is a piece that speaks of what the best friend wants to say but can’t because the other friend is too busy lamenting about her lovelife.

Being single doesn’t mean you know nothing about love.

“Sa Pagitan ng Tayo Ba at Hindi Na” was performed by Rain Gutierrez. This is for the meantime girls and meantime boys. This is for those who are not really in a relationship but are more than friends, the guys and girls that you go to because you are bored, because you have nothing else to do, and the ones you leave behind when you find someone new but go back to when it doesn’t work out. This is for the Tinkerbell of your life that you play with when you’re bored to amuse you because Wendy isn’t there yet.

The last piece of the show was performed by Mark Ghosn Panata ng Pusong Bagong Laya. This is for the people who are slowly moving on from a heartbreak, for people who went through hell and back to heal what was broken, find what was lost, and get back themselves from the love that destroyed them.

This is the realization, the part where you realize that every tear and heartache was meant to make them stronger not bitter. This is for those who are able to listen to a song, see a movie, go back to a place, and relive memories without any pain.

At the end of the show, they played Tuloy Pa Rin which is the national anthem of anyone and everyone who has moved on, wants to move on, and is finally moving on. As they say, love ends but life goes on. 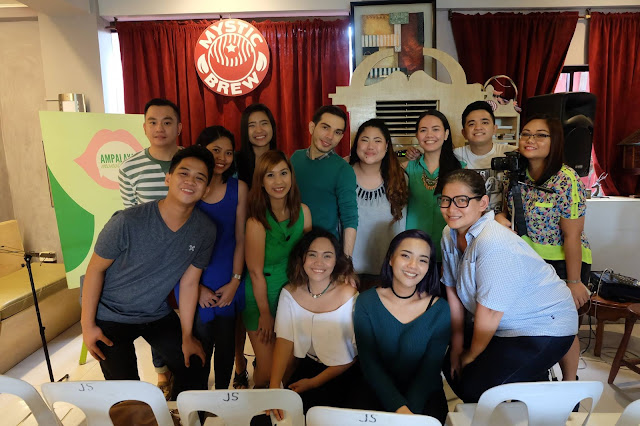