my Kdrama moment with Mr. Perfect

I have been into Kdrama since early August and anyone who knows me and especially those who follow me on Twitter knows that I am insanely obsessed with my Kdrama to the point where I sometimes dream of being the heroine of one. Of course I know that it's never gonna happen or so I thought.

Earlier tonight I had a meeting and it didn't go so well which was a total downer because for the first time in 8 months, I actually took the time to fix myself, wear a dress, and heels to a meeting and it was a total suckfest. Finally, the meeting was over and so I booked an Uber car.

First impression was that the Uber car I got was spiffy. I even checked coz I might have accidentally booked Uber black instead of UberX but it was an UberX. I found the car very appealing and didn't even give a second look at the driver. I was pissed after all and I had a few seconds to rant at my colleague which I did in front of the driver.

Soon as I got in, I called another friend who owns a coffee shop near where I live and asked if I could drop by and rant. My friend said yes so I told him I'd be there in 30minutes since I was in an Uber car. When I dropped the call, I muttered to myself about wanting to yell but knowing that it would be horrible since I was in an enclosed space. Much to my surprise, my Uber driver whom we shall call Mr. Perfect (its a play on his name) responded and said that it's okay to yell.

Trust me when I say that there is absolutely nothing charming or attractive when I rant. I just rant and go psycho. I babble like a baboon. Thankfully, Mr. Perfect was a perfect gentleman and he listened and even reacted at the right moments and made the right comments.

Eventually I even ranted about my non-existent lovelife and how the people I had a meeting with thought I was dating someone coz I was blooming. He asked how long I haven't had a boyfriend and how long ago was my last date and it seems my answer flabbergasted him.

We started talking and this was where the Kdrama moment started happening. You see, I was seated behind him so he couldn't see my face. When we were at a stop, he asked to see me and when he turned around, I don't know what evil spirit came over me but I actually leaned to the right to give him better access to my face and I did this and said Ta-Da! 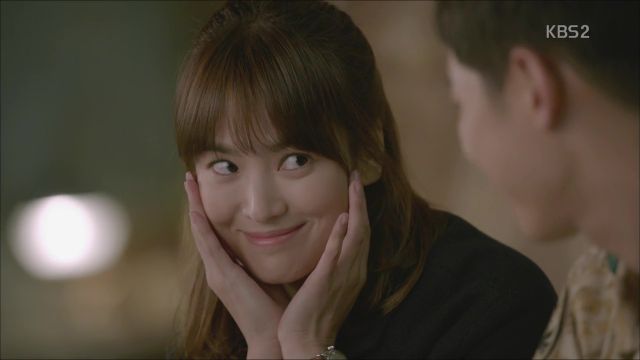 Someone kill me now.

He asked if he could turn down the aircondition at some point coz he was feeling really cold and I said it was fine then I realized he was the one who set it that way. He then said that he was fine moments ago but he suddenly had the chills. He even held out his hand for me to touch so he could prove that he was feeling cold.

I don't know why but I actually did touch his hand. WHAT IS WRONG WITH ME???

At some point, he also asked for my number and I normally wouldn't give it out but for some reason, it felt like the natural thing to do and I did. Mind you, I didn't even really know what he looked like and I gave my number. AGAIN, WHAT IS WRONG WITH ME????? This was like a scene from the movies.

THIS WAS WEIRD RIGHT? The weirdest part was I didn't find it freaky. It came off as sweet. I SHOULD BANG MY HEAD ON THE WALL!!!!

So I said okay and we continued chatting. We even got to the point where I showed him a throwback photo of me. WHY OH WHY???? So I got off at my village's gate and he ended the trip. I asked him why since technically it hasn't ended since he's taking me to the coffee shop and he said it was fine. He just had to get out of the car and feel a bit of warmth. I walked to my house and thought to myself, he's probably going to be gone when I walk back but minutes later, he was there.

I FELT A LITTLE JUMP OF JOY. EEEKKK.

He asked if I could sit in the front seat and I said yes. I NEVER WORRIED ABOUT MY SAFETY. SO SO WEIRD. He just felt comfortable. THIS WAS TRULY ONE OF THOSE KDRAMA MOMENTS. He was driving the car very slowly and then he asked if I was in a hurry and I instinctively knew he wanted to spend a bit of time and I was fine with it. We chatted and he showed me some of his throwback photos as well.

When we finally got to the coffeeshop, he asked if he could walk me inside. AIGOO!!!!!!! KDRAMA MOMENT IN THE FLESH. I felt like a girl and I haven't felt that in such a long time. It felt really nice and I wanted to twirl and burst into song and sing "I feel pretty, oh so pretty!"

So I introduced him to my friends and he was pretty cool about it and we've exchanged a couple of SMS with it ending to him saying he wanted to try the mocha at my friend's coffee shop ... WITH ME.

Anyway, I'm not sure what will come out of this or if something will even come out of it but thank you Mr. Perfect. I was having a really awful night and you turned it completely around. I haven't felt like such a girl in years and you gave me this Kdrama moment and it felt darn good.

The stupid smile on my face as I type this is testament to how much kilig I felt because of a few moments with you. Knowing my luck with men, I'd probably never hear from you again.
on September 16, 2016
Email ThisBlogThis!Share to TwitterShare to FacebookShare to Pinterest
Labels: Relationships