More than just a successor to the popular EOS R6, the EOS R6 Mark II is a game changer that redefines Canon’s “6” series of cameras. It adds many professional video production features to overhaul essential performance and revved-up still shooting features, elevating it to a still and video powerhouse. 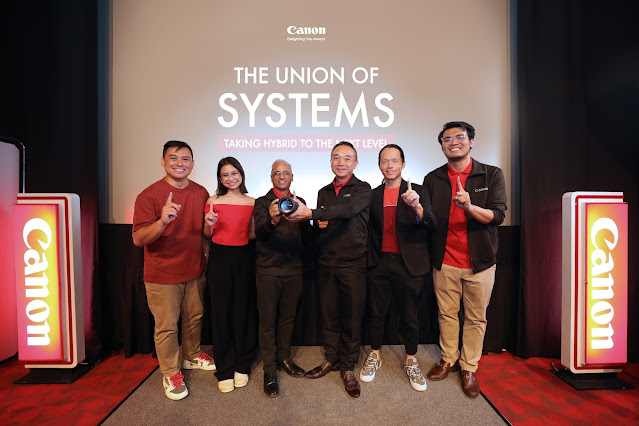 “With the increasing popularity of video content, we believe that the EOS R6 Mark II will surely deliver the top-notch image quality and excellent video performance to meet the constantly evolving demands and requirements of Filipino image makers, professional shooters, and serious content creators with its breakthrough technologies and features.,” said Benny Yu, Head and Director of Consumer Imaging and Information (CII) Division, Canon Marketing (Philippines).

An alternative Quick Control screen that resembles those on Cinema EOS cameras provides an intuitive interface for users using the EOS R6 Mark II alongside the Cinema EOS system. 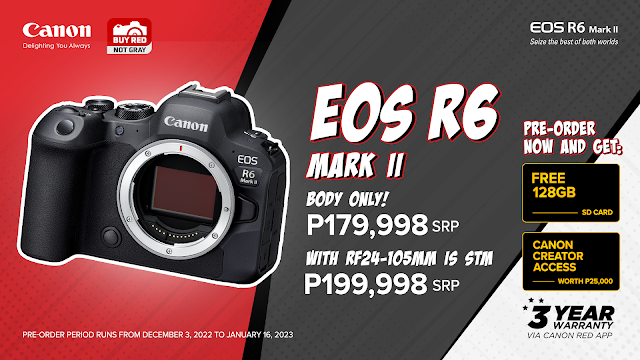 The EOS R6 Mark II is the first Canon EOS camera to support focus breathing correction, which reduces unwanted changes in the angle of view during focus transitions. This complements existing features such as AF speed adjustment, providing greater control over focus transitions which is crucial for expression.

In addition to the existing zebra display, the EOS R6 Mark II is equipped with the false color function widely used in the Cinema EOS system, making it easier to adjust exposure even in tricky conditions.

Pre-recording for movies: A staple feature on Cinema EOS cameras, this allows users to capture moments that occur up to 5 seconds before the record button is pressed, reducing the need to “record on standby”.

Hybrid Auto Mode: This records a video 2-4 seconds before shutter release during still image shooting and automatically compiles them into a digest movie for the day, providing readily available video content for various purposes.

Up to 40 fps Burst with AF/AE Tracking: Enhanced Detection and Tracking Capabilities 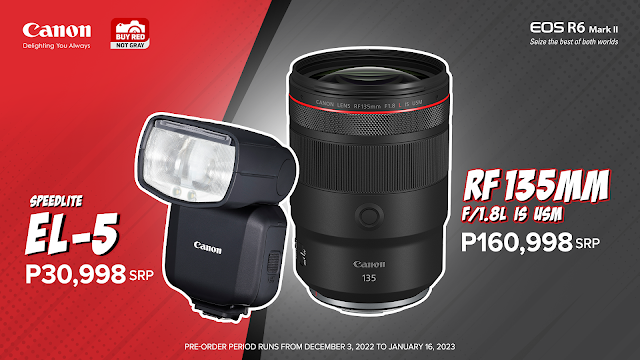 The EOS R6 Mark II adds horses, trains, and airplanes to the existing subjects detectable by the deep learning-based algorithm. Users can specify right or left eye priority for Eye Detection AF in photo or video mode. They also have more flexibility in deciding the subjects to be detected. The new “Auto subject detection” mode allows the users to automatically detect more than one type of subject within the same frame.

Tracking performance has been improved with the expanded application of deep learning technology to subject tracking. By extracting subject features based on deep learning, the camera can now maintain consistent tracking even with changes in posture, orientation, or ambient brightness. This applies to animals, vehicles, and other subjects of the user’s choice for both stills and videos.

Other noteworthy new features that aid responsiveness include:

Digital teleconverter: Increases the focal length by 2x or 4x with the touch of a button, allowing quick response to unexpected telephoto shooting moments without the need to change lenses.

The EOS R6 Mark II is equipped with In-Body IS and HDR PQ HEIF recording. A new “Moving subject priority” HDR mode has been added, which helps to overcome the difficulty of creating HDR merges of moving subjects by achieving the same effect with just one shot.

Faster wireless connections to smart devices are now possible as the EOS R6 Mark II supports both 5GHz and 2.4GHz wireless connections. Smartphone connectivity is also expanded, with Camera Connect app functions such as automatic data transfer and shutter release, which are now also possible via a wired USB connection. Data transfer to FTP servers is also supported via wired and wireless methods.

Designed for Durability and Power Efficiency

The EOS R6 Mark II features dual SD card slots for extra reliability, and a dust- and drip-resistant construction designed to support outdoor shooting. Designed for power efficiency, it can shoot up to 760 shots on a single charge using the LP-E6NH battery.

Canon’s first professional 135mm prime lens for the RF mount is also currently the only 135mm lens in the market to be equipped with built-in optical image stabilisation with up to 5.5 stops. When combined with a compatible camera, it can achieve up to 8 stops of image stabilisation via Coordinated Control IS. Despite this new inclusion, it weighs only approximately 935g—lighter than some lenses with similar specifications but without image stabilisation.

It also boasts a larger f/1.8 aperture compared to its popular EF counterpart, which not only provides beautiful bokeh for excellent subject-background separation, but also allows faster shutter speeds in challenging lighting conditions.

Leveraging on the new 15-pin Multi-Function Shoe on some of the recent EOS R cameras, Speedlite EL-5 achieves faster and more stable communication with the camera, which improves overall performance and reliability. It allows additional functionalities such as wireless control via a smartphone.

Built for Speed: Fast Recycling Up to 0.1 Sec; At Least 95 Continuous Flashes at Full Output

Smaller, lighter, and more affordable than the Speedlite EL-1, the Speedlite EL-5 uses the same high-capacity rechargeable LP-EL lithium-ion battery but with better efficiency. It features a recycling time of approximately 0.1 to 1.2 seconds and can emit continuous flashes approximately 95 times or more at full output (GN 60).

Microflash as low as 1/1024 can be activated for situations that require fine lighting control.

Wireless flash functionality has been expanded - in addition to compatibility with wireless control as a transmitter and a receiver, the Speedlite EL-5 also supports wireless remote control of flash settings using a smartphone via the Camera Connect app. It shares the same dust- and drip-resistance quality as the EOS R5 body, ensuring stable performance.

on December 21, 2022
Email ThisBlogThis!Share to TwitterShare to FacebookShare to Pinterest
Labels: PR and Sponsored