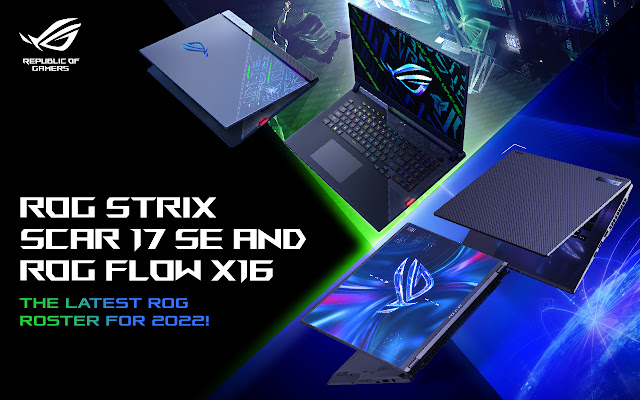 Both models will be available in the Philippines this September 2022 at official ASUS and ROG Concept Stores and select multi-brand retailers nationwide. 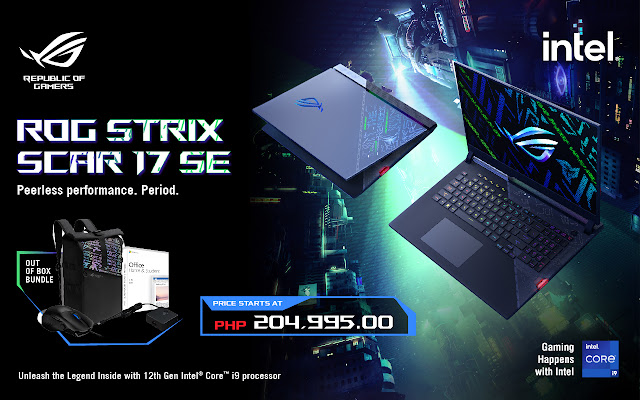 The all-new upgraded ROG Strix SCAR 17 Special Edition is the most powerful laptop in the ROG arsenal so far in 2022, boasting the latest and most potent Intel® Core™ i9-12950HX, a powerful 65W laptop CPU only exclusive to the ROG Strix SCAR 17 SE itself. Paired with up to an NVIDIA® GeForce RTX™ 3080Ti with a maximum TGP of up to 175W with Dynamic Boost and complimented by a MUX switch, this no-holds-barred battle station undoubtedly pushes all limits of portable gaming to new heights. To top all this power off, the all-new ROG Intelligent Cooling design system paired with Thermal Grizzly’s Conductonaut Extreme allows for lower temperatures of up to in long gaming sessions.

All this power and performance are complemented by the best specifications for esports and gaming. A 17” display of WQHD with Dolby Vision and Adaptive Sync, as well as a refresh rate of 240hz fits to get the best immersive experience and competitive advantage for any triple A or esports title. This also comes with Dolby Atmos Speakers for the best audio quality and response available.

To cap it all off, the stylish cyberpunk-inspired aesthetic features first-of-its-kind invisible ink text applied directly to its metal chassis, the same signature RGB lighting, and customizable armor caps as other SCAR models. In standard lighting, this substance has a matte metallic texture, but with a UV flashlight, the ink appears green and blue with hidden messages to help beat the ROG parkour game SCAR Runner.

The ROG Strix SCAR 17 SE will be available this September 2022 in the following models in the Philippines: 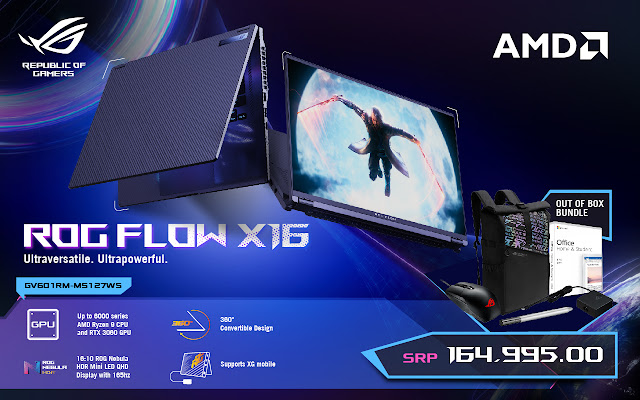 Powered by an AMD Ryzen™ 9 6900HS processor and an NVIDIA® GeForce RTX™ 3060 GPU with MUX Switch, the ROG Flow X16 is a powerful gaming laptop for anyone who demands power. Together with its portability and versatility, thanks to its 360° hinge, this allows gamers to use it as a traditional clamshell laptop, utilize tent mode for better airflow with an external keyboard or gamepad, and even use tablet mode to make use of its touchscreen in social media apps and games. All these features and power truly makes the ROG Flow X16 the epitome of ultra-versatile and ultrapowerful packed in a gaming laptop.

One of the best features of the ROG Flow X16 has to boast is its one-of-a-kind display. This sports the ROG Nebula Display, a unique display feature to a few ROG gaming laptops. With a 16” QHD 165 Hz Mini LED HDR display with 100% coverage of the DCI-P3 color space and up to 1100 nits of peak brightness, the ROG Flow X16 is the best for both gaming enthusiasts as well as any creative professional who depend on color accuracy for its hardware.

In addition, the Flow X16 also supports XG Mobile external GPUs up to the latest AMD Radeon™ RX 6850M XT. Like its other brothers in the ROG Flow series, it allows gamers to transform the ROG Flow X16 into a powerful workstation and adds additional ports to their setup.

The ROG Flow X16 will be available this September 2022 in the Philippines.