From now until September 30, 2022, fans of this culinary creation can enjoy special deals and other surprises on their dine-in, web app, and delivery purchases. 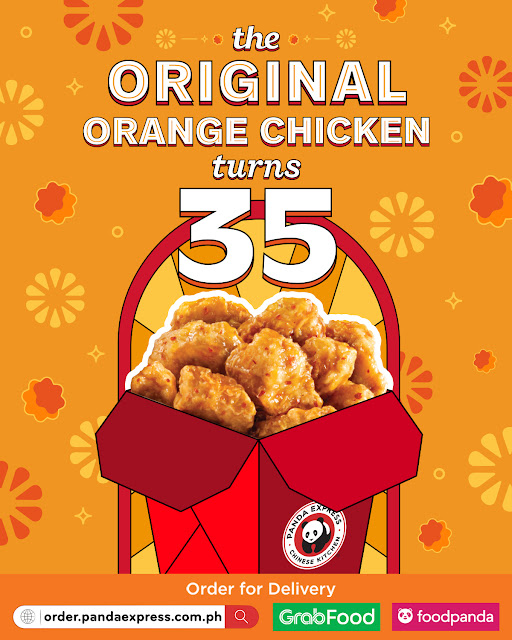 “For 35 years, The Original Orange Chicken has been a quintessential American Chinese dish that stood the test of time and remains Panda’s best-selling menu item,” said Jimmy Wang, Executive Director of Culinary Innovation at Panda Express. “This iconic dish has revolutionized the concept of American Chinese cuisine – a timeless cuisine that takes a hybrid approach of bridging cultures, ingredients, and flavors while respecting its roots.”

Origin of the Original

Panda Express was founded by husband-and-wife tandem, co-CEO and co-founders Andrew and Peggy Cherng in 1983. They popularized American Chinese cuisine by using authentic Chinese recipes adapted to global tastes, which successfully established the brand as the largest Asian dining concept in the US and the largest American Chinese concept in the world.

Since the opening of the first Panda Express® location in the Philippines in late 2019, the bestselling Original Orange Chicken, a wok-tossed crispy chicken entree coated in sweet, tangy sauce, has drawn strong support from Filipino foodies. The dish was inspired by Panda’s co-founder Andrew Cherng’s hometown flavors of Yangzhou, China.

The Original Orange Chicken is Panda’s most famous dish and represents about a third of the entire business. In 2021, Panda Express® served over 117 million pounds of Orange Chicken worldwide!

Starting August 15th through September 30th, dine-in guests may enjoy P35 off coupons for their Original Orange Chicken bowl, plate, and bigger plate orders. For those who are using the web app to purchase their Panda favorites, there will be a free medium pail of Orange Chicken on a minimum order value of P750. For more information about the offers, visit order.pandaexpress.com.ph; offers cannot be combined with other promotions and discounts.

To date, Panda Express has eleven stores in the whole of Metro Manila that are open for dine-in, take-out, and delivery through order.pandaexpress.com.ph, GrabFood, and foodpanda. Delivery locations include select areas in Manila, Pasay, Makati, and Quezon City.