The Script is BACK!

THE SCRIPT is thrilled to announce that they are coming back to Asia and bringing their Greatest Hits Tour 2022. The Irish pop-rock trio will be performing in Manila on Friday, September 23 at the Mall of Asia Arena. Presented by Wilbros Live and Midas Promotions. 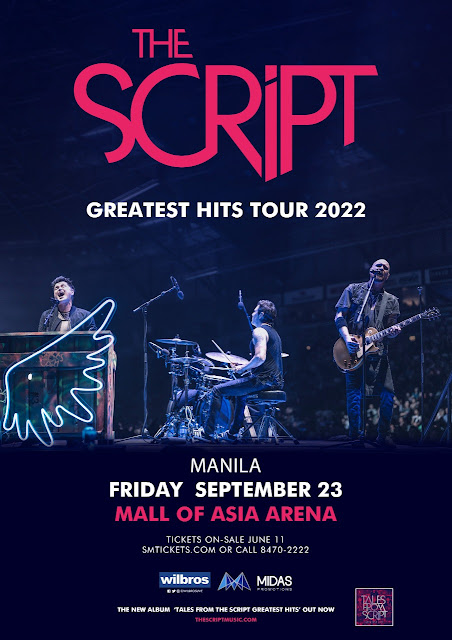 The group will be touring in celebration of their Tales From The Script album, a compilation of their biggest hits and fan favorites from their six studio albums so far. The album highlights classic cuts from the trio’s stellar catalog, including the UK #1 smash ‘Hall of Fame’ (featuring will.i.am) and chart-topping hits ‘The Man Who Can’t Be Moved’, ‘For The First Time’, ‘Superheroes’ plus the new single ‘I Want It All’. It also includes landmark moments and staples of their live show ‘Breakeven’ their debut singles ‘We Cry’ and ‘Rain’.

Tickets to THE SCRIPT: Greatest Hits Tour 2022 in Manila will go on-sale beginning June 11, 10AM at SMTickets.com and all SM Tickets outlets nationwide. #TheScriptMANILA2022

on June 02, 2022
Email ThisBlogThis!Share to TwitterShare to FacebookShare to Pinterest
Labels: PR and Sponsored