ASUS Republic of Gamers Launches Multiple New Products at For Those Who Dare: Boundless Virtual Event

The ASUS Republic of Gamers (ROG) today announced multiple new gaming products at the For Those Who Dare: Boundless virtual event. The new launches include two high-performance ROG Strix and ROG Flow gaming laptops, a series of new bags and apparel from ROG Slash, the Team ROG initiative, and a standalone first-person parkour game for ROG Citadel XV. ROG is dedicated to giving gamers the best technology, products, and experiences possible, and the For Those Who Dare: Boundless event is a continuation of that commitment. 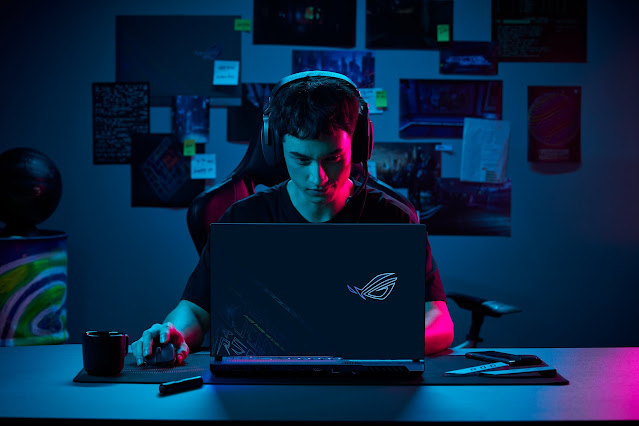 The new ROG Strix SCAR 17 Special Edition houses the latest hardware and cutting-edge cooling solutions to power class-leading gaming experiences. A custom vapor chamber, paired with ROG’s exclusive Conductonaut Extreme liquid metal applied to both the CPU and GPU, allows the SCAR 17 SE to push its hardware further than ever before. With a maximum CPU TDP of 65 W and a maximum GPU TGP of 175 W with Dynamic Boost, the SCAR 17 SE has the horsepower to reach the bleeding edge of high refresh rate gaming without breaking a sweat.

The improvements start at the beating heart of the machine, powered by the brand-new Intel Core™ i9-12950HX, an incredibly powerful 65 W laptop CPU. With boost frequencies of up to 5.2 GHz on its Performance cores, single-threaded performance never falters, leading to ultra-high framerates in the latest esports titles. When set to Manual mode in Armoury Crate, this 65 W CPU can boost to a staggering maximum turbo power (PL2) of 175 W for a limited time, allowing the SCAR 17 SE to pull double duty as a powerful content-creation machine when the discrete GPU is disabled. The SCAR 17 SE was able to achieve an incredible score of 22,257 in the Cinebench R23 multithreaded test when in Turbo mode, a result rivaling desktop performance. The NVIDIA GeForce RTX™ 3080 Ti Laptop GPU also has a maximum TGP of up to 175 W with Dynamic Boost, purpose-built to deliver the highest amount of frames on either its QHD 240 Hz or FHD 360 Hz panel options. Both displays have a 3 ms response time, offer Dolby Vision support, and are Adaptive-Sync compatible, providing gamers with gorgeous visuals in-game or watching their favorite content.

With up to 64 GB of blazingly-fast DDR5 4800 MHz RAM and PCIe® Gen 4 storage in a RAID 0 array, this gaming juggernaut leaves loading times in the dust. The machine also features a distinct cyberpunk aesthetic, with first-of-its-kind invisible ink applied directly to its metal chassis. In normal lighting, this substance has a matte metallic texture, but with a UV flashlight, the ink appears green and blue, and offers in-game hints for SCAR Runner. 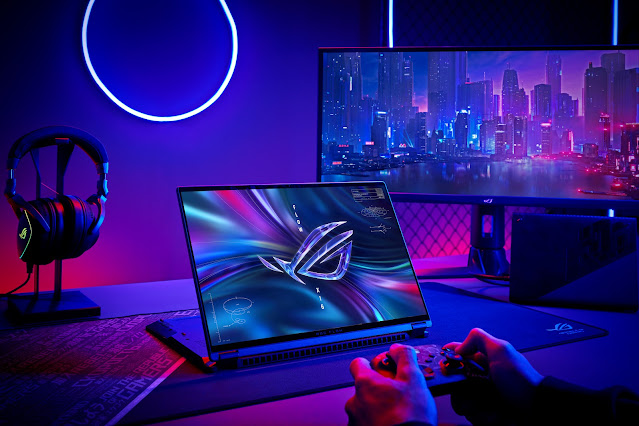 The Flow X16 is the third addition to the ROG Flow family, and the most powerful yet. Featuring an AMD Ryzen™ 9 6900HS processor and an NVIDIA® GeForce RTX™ 3070 Ti Laptop GPU with a MUX Switch, the Flow X16 can render frames in a game much faster than its 19.4 mm thick chassis would imply. With the RTX™ 3070 Ti operating at a maximum TGP of 125 watts with Dynamic Boost, the Flow X16 redefines what ultraportable gaming and content creation look like.

ROG has not sacrificed usability and upgradeability for this thin and light form factor. Both the blazing-fast DDR5 4800 MHz memory and PCIe® 4.0 SSD are accessible and upgradeable. The Flow X16 supports up to 64 GB of RAM, and both SO-DIMMs are easily accessible for future upgrades. Featuring up to 2 TB of SSD storage, the Flow X16 also has a second open M.2 slot, making it painless to drop in more storage for a scratch disk or larger game library. This versatility also includes full support for the XG Mobile family of external GPUs. These compact enclosures house laptop variants of the highest-performing AMD and NVIDIA discrete graphics chips while being portable enough to comfortably carry in a backpack. These unique external GPUs also act as an I/O expansion hub, housing dedicated Ethernet, USB Type-A, DisplayPort™, HMDI® 2.1 ports, and an SD card reader.

The Flow X16 also features the flagship ROG Nebula HDR Display, a dazzling QHD / 165 Hz Mini LED panel with 1100 nits peak brightness, and a 100% DCI-P3 gamut. ROG has not sacrificed usability and upgradeability for this thin and light form factor. These premium parts are complemented by the all-new Frost Force Technology and Pulsar Heatsink, featuring three fans and a high-density heatsink to keep performance high and temperatures low. 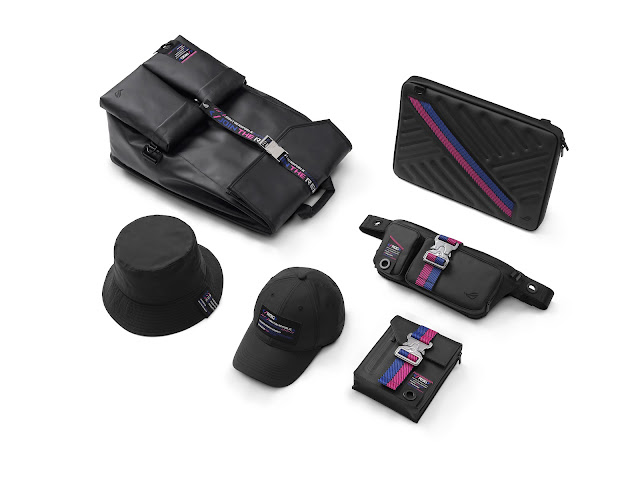 Inspired by cyberpunk and the code that builds our modern virtual world, these products offer versatile bag and apparel options, are built with premium materials, and are designed with gaming culture at their core.
ROG Slash is also defined by its versatile utility and durable build quality. With adjustable straps, multiple compartments, and water-repellent TPU materials, the Crossbody Bag, Backpack, Hip Bag, and Protective Laptop Bag are ready to secure the essentials of everyday life, while the new Cobra Buckle Cap and Bucket Hat offer standout style and protection from the elements.
Celebrate gaming with #TeamROG
Team ROG is expanding its roster in 2022, pairing high-end ROG products with a diverse cast of influencers, professional gamers, content creators, and athletes from around the world. Team ROG members have all agreed to join ROG in promoting gaming across the globe.
ROG is delighted to continue the current partnership with esports team Misfits Gaming as a part of the broader Team ROG initiative. ROG is also pleased to announce a new partnership with ReKT Gaming, an organization that operates esports teams and content creation across a range of today’s most popular games. To check out the members of Team ROG and download their exclusive wallpapers, please visit the official website.
Players vault to new heights in SCAR Runner

Available as an expansion of the ROG Citadel XV game, SCAR Runner is a first-person parkour game following the story of X, who is in a race against time to recover critical information. This title also ties in with the physical chassis of the ROG Strix SCAR 17 Special Edition, with clues hidden on the laptop itself. SCAR Runner is launching alongside a giveaway campaign with over $20,000 in prizes available, including the Strix SCAR 17 SE and ROG Slash apparel. The campaign will run from May 17 - to June 30, 2022, and complete campaign information can be found here.
Local pricing and availability are yet to be announced for the models introduced during the event.
For more information on all the products launched including the new ROG Strix Scar 17 Special Edition and the ROG Flow X16 please go to the event page found on this link: https://rog.asus.com/2022-ces-rog-gaming-laptops/
on May 20, 2022
Email ThisBlogThis!Share to TwitterShare to FacebookShare to Pinterest
Labels: PR and Sponsored