BTS will be at the 2021 American Music Awards, live exclusively on Smart GigaPlay

Leading mobile services provider Smart Communications, Inc. through its new GigaPlay App is bringing the 2021 American Music Awards (AMAs) exclusively to its subscribers, live on November 22 at 9am PHT. Hosted by multi-awarded rapper Cardi B, the 2021 AMAs is set to excite the hearts of music fans everywhere when it brings together the biggest artists at the Microsoft Theater in Los Angeles. In this time of the pandemic, Smart makes the biggest acts available to Filipinos through amazing live streaming technology 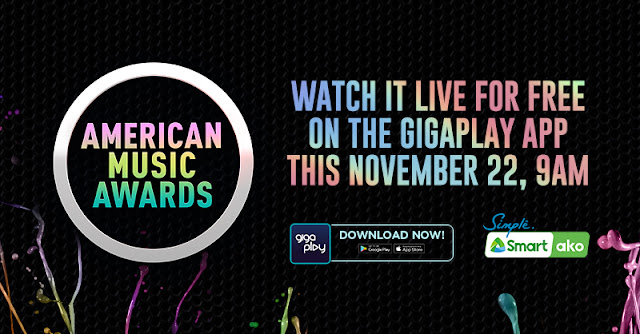 Headlining the event is Korean supergroup and Smart endorser BTS (방탄소년단), who will be doing two separate performances during the show. First is the remix of their hit song “Butter” live for the first time together with fellow AMAs winner and nominee Megan Thee Stallion and performance of their recent chart-topping collaboration with Coldplay, “My Universe.” The six-time AMA-winning group is also nominated for three major awards this year, including Artist of the Year—a first for any Asian act.

Rodrigo topped this year’s nominations with a total of seven nods including Artist of the Year while her hit single Driver’s License is up for trending song, music video, and pop song nominations. The Weeknd, on the other hand, earned six AMA nods in a close second. For group acts, Silk Sonic is up for three nods including best duo or group, video, and soul song/R&B.

To experience the whole show, simply download the GigaPlay App via smrt.ph/gigaplay. Select the 2021 American Music Awards live as long as you’re on PLDT Wifi or Smart network. The GigaPlay App is available to all Smart subscribers and the opportunity to experience live HD concert technology is all but a few taps away on your Smart-powered devices at no extra cost.

Expect more music, entertainment's biggest events plus Video on Deman of previous specials on the Smart GigaPlay App. Smart’s GigaPlay App is available through the App Store or Google Play.

Powered by the Philippines’ fastest network

Smart’s new GigaPlay app is home to the most exclusive live events, concerts, entertainment shows, sports, and K-content from all around the world. Combined with the convenient convergence of other Smart services in the GigaLife app and the fastest network connection in the country, enjoy the best customer experience wherever, whenever.

Smart subscribers enjoy next-level speeds with the country’s fastest and most reliable 5G mobile network as reported by Ookla. To date, Smart has already fired up around 6,400 5G base stations nationwide making it the country’s first, fastest, and widest 5G network.

Smart has also reasserted its dominance as the Philippines’ fastest mobile network for the fourth year in a row, based on analysis by Ookla of tests taken with Speedtest® covering the first half of 2021.

on November 19, 2021
Email ThisBlogThis!Share to TwitterShare to FacebookShare to Pinterest
Labels: PR and Sponsored